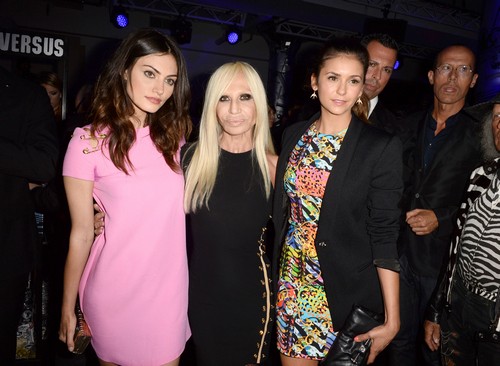 We have good news for The Vampire Diaries and The Originals fans! Nina Dobrev is set to make a guest appearance on The Originals this season. I suppose they had to offer her some incentive to stay, considering how close she is to quitting the show.

We’ve covered this topic before, but for those who are catching up, here it is in recap form: Nina Dobrev broke up with her longtime boyfriend and Vampire Diaries co-star/love interest Ian Somerhalder. Things got awkward on set, Ian got himself a new girlfriend in Nikki Reed, and their PDA made Nina uncomfortable. Even though her scenes with Ian are limited this season [totally on purpose], she’s not happy with her job right now, and rumors are that she is quitting the show after Season 6 – we can’t say we blame her. It’s hard enough to see your ex every day, but imagine seeing your ex with their new partner every day – especially when you don’t have a new relationship to show off?

Of course, Nina has no such issues with appearing on The Originals – as far as we know, she’s not dated anyone on that show, although I wouldn’t put it past her to start now.

No, Julie Plec [the writer/creator of The Vampire Diaries and The Originals] spoke to E! Online about Nina’s surprise cameo in The Originals, explaining, “There was a character’s name introduced a long time ago in season three in association with Klaus [Joseph Morgan] and Elijah [Daniel Gillies] and how they became vampires and a girl that they both loved a long time ago who was the original doppelgänger, Tatia. So Nina Dobrev will be visiting The Originals for a nice little storyline in our fifth episode which airs November 3.”

How nice, Julie even gave us the episode number and everything. Expect to see a ratings bump for the fifth episode of The Originals, even if Nina Dobrev’s cameo is brief and pointless. Also, don’t be shocked that if Ian Somerhalder remains on TVD then Nina Dobrev winds up on The Originals next season!