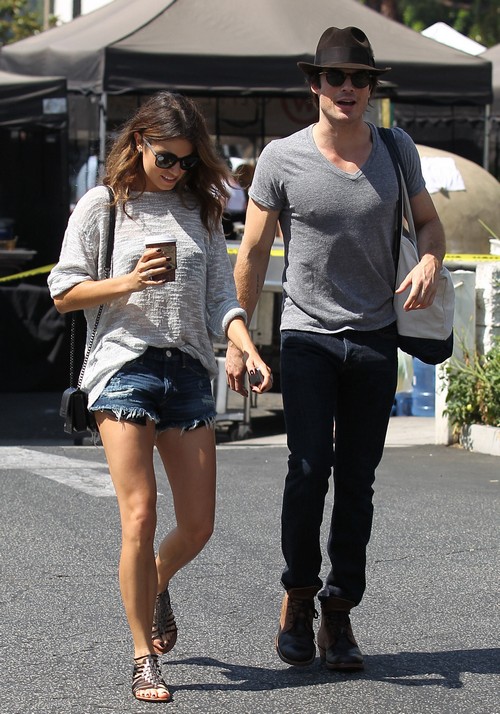 Nina Dobrev isn’t speaking with Ian Somerhalder over his Nikki Reed PDA and even worse, Nina is ready to quit The Vampire Diaries she is so upset! We are now days away from the season 6 premiere of The Vampire Diaries, but will we ever see a seventh season? At least, a seventh season with the same leads as we have now? From what we’re hearing, it’s not even certain if the cast will finish Season 6 the same way, considering the on-set tension between Nina Dobrev and Ian Somerhalder.

The writers have already changed the Elena and Damon romance to focus more on Elena and Stefan during Season 6, not to mention kept Elena’s and Damon’s characters apart for much of Season 6. This wasn’t just to serve the plot, although it definitely lends more mystery to the story. It was also because they were well aware of the awkwardness concerning Nina’s relationship with Ian, and didn’t want to force the actors into doing love scenes together – ESPECIALLY not now that Ian has a new girlfriend, Nikki Reed, and loves rubbing his relationship with her in everyone’s faces.

See, it’s just bad form to bring a new girlfriend around an ex-girlfriend, no? Even if Nikki’s not a regular presence on the Vampire Diaries set, we know she and Ian are spending as much time together as possible – both while he’s working on the show and when he’s not. Unfortunately, that also means that everyone around Ian is subject to seeing Nikki everywhere, and I can’t imagine that’s going over too well with Nina.

Now that she actually has a solid prospect of a film career, how much longer is she going to hold out on a show that she doesn’t enjoy working on? Most actors start to chafe under the monotony after a couple of seasons anyway, and Nina now has added incentive to peace the eff out. The only question is – will she stuck around for her contract to end, or convince the writers to let her go before that? An epic death scene, perhaps?