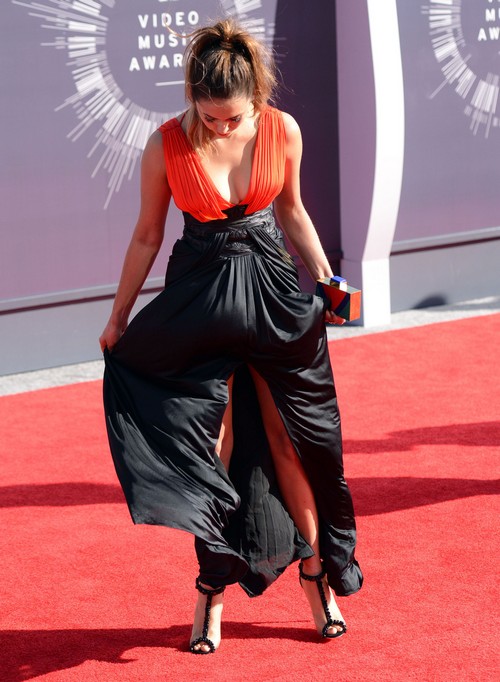 Nina Dobrev and Alexander Ludwig are totally dating. We know they worked together on the movie The Final Girls, and that’s when the initial rumors of them hooking up began. But then Ian Somerhalder went public with Nikki Reed, and everyone forgot all about Nina’s many flings. However, Nina was spotted vacationing with Alexander in Ibiza, and both of them looked pretty friendly, if you ask me.

Now, there are several explanations to what’s happening here. It could be that they just really hit it off when they filmed The Final Girls together, and have stayed friends since then. I’m not inclined to buy that explanation, only because it’s hard to believe that it would be JUST the two of them vacationing without anyone else if they were just friends.

The second reason is that Alex could be publicity stunting for his new movie, When The Game Stands Tall. The film had an abysmal box office opening, but as we all know, PR romances are a great way to promote a film without looking like you’re promoting a film. Considering how popular Nina is with her fans – and the tabloid media – he might be thinking that pap photos of them ‘dating’ might be a good way to increase some of the publicity surrounding the film. Unfortunately for him, there’s only so much publicity can do for a mediocre film.

Lastly, it could be that Nina and Alexander are dating, and Nina could be trying to make Ian jealous. After all, what are the chances of the paps just stumbling onto Nina and Alex on a yacht in Ibiza? It’s not like they frequent the seas for the minuscule chance of spotting a celebrity. I can’t say for sure who called them, but somebody told them that Nina and Alex would be there – and then they went and got the photos to prove it.

What do you guys think? Will Nina’s attempt to make Ian jealous succeed, if that’s actually what’s happening here? Or do you believe that Nina and Alex are just friends hanging out? Let us know your thoughts in the comments below.