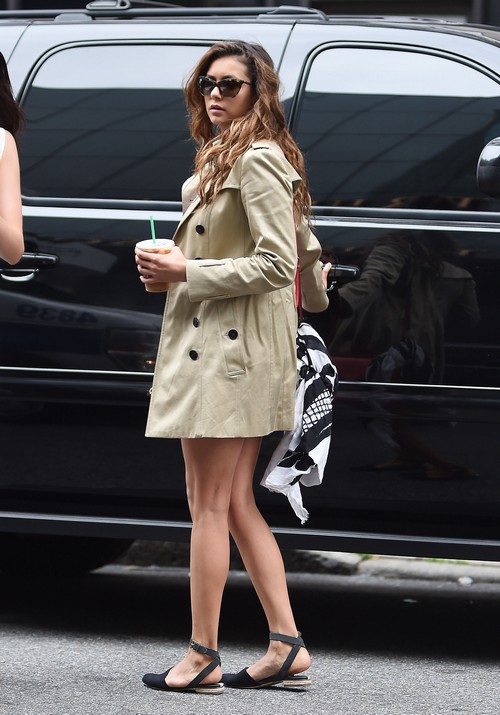 Several new reports that came out yesterday suggested that Nina Dobrev and actor James Marsden had a hot and steamy hookup during ‘one wild night out at a karaoke bar in New Orleans’.

Somehow, Nina and James doing karaoke together [with friends, mind you] has turned into them dating for two months, according to Star Magazine. Star’s source claims that James and Nina couldn’t keep their hands off each other that night, adding, “Nina and James were making out the entire time. They didn’t care who saw.”

Even if that’s the case, why would a hook-up suddenly become a 2-month relationship? Oh, apparently because Nina’s ‘pals’ are telling Star that, with this source adding, “Nina hinted things could turn serious. She is totally smitten.”

Look, I can completely believe that Nina and James would hook up during a drunk night at a bar in New Orleans. I mean, the girl is gorgeous, and she can get pretty much any guy she wants. But she’s reported to be in a budding new relationship with Muse member Dominic Howard, so when would she have had time to date James as well? That’s not even considering the age difference between them, but of course, she has dated Ian Somerhalder so we already know that’s not such a big deal for her.

Clearly, Nina is playing the field, and refusing to settle down with one person. In that scenario, we already know that she’s NOT dating James Marsden. If she was meeting with him on the regular, you’d think some legitimate sources would have spoken up by now, no? Also, Nina’s been in the spotlight long enough to know not to make out with other celebrities in front of eyewitnesses at bars. Her flings and relationships have been outed like this in the past [cough, Liam Hemsworth], and she’s smart enough to have learned from her mistake.

“Vampire Diaries” star Nina Dobrev enjoys an iced coffee from Starbucks as she steps out in New York City, New York on June 11, 2014. Rumors are heating up that Nina is dating Muse drummer Dominic Howard after the two were spotted together at two different events recently.