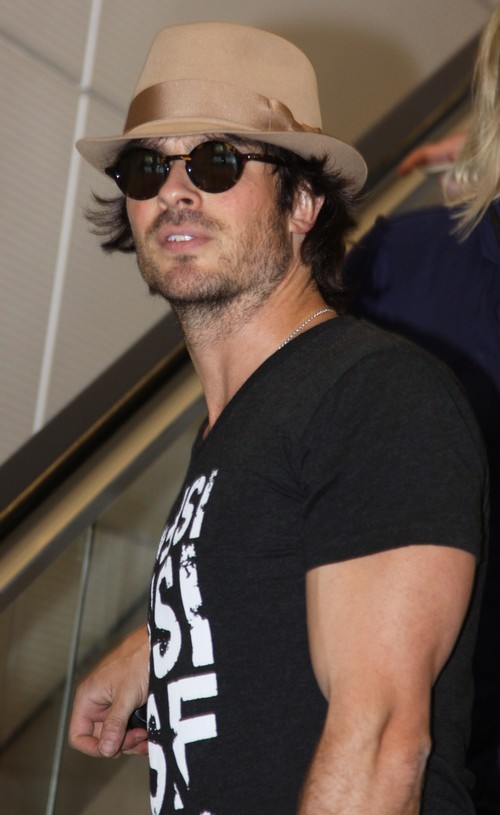 What a mother wants, a mother gets. Ian Somerhalder and Nina Dobrev were broken up for a long time before Nina’s mother, Michaela Constantine, reportedly intervened and got the two lovebirds back together.

Michaela is a big fan of Ian’s, and that much was clear when she was tweeting in support of his congressional appearance on June 24th to promote animal and environmental rights. She wrote, “Ian will be testifying in front of Congress at 2 p.m. EST. He’ll tweet the streaming info, as soon as he gets it, so stay tuned.”

Michaela probably heard about her daughter’s love life in the news, and decided that the best way to stop Nina from sleeping around was to get her back with Ian. And Nina’s reportedly very close to her parents, and probably didn’t want her mother to be disappointed.

However, I’m pretty sure that Nina’s mother only hastened along the inevitable. Nina and Ian were well on their way to getting back together, with or without any external help. They were reportedly back to hooking up a few months ago, and they’d allegedly discussed the idea of getting back together for good. The only issue is that Nina is still contracted to another year [at least] on the Vampire Diaries, whereas Ian’s character has just been killed off on the show – and so, for all intents and purposes, he’s a free agent. But what’s he going to do – buy an apartment and stay in Atlanta full-time next year while Nina’s filming? I’m sure he won’t put his own life and career on the back burner while waiting for Nina, so they were probably figuring out the logistics of reuniting on a permanent basis. But apparently, whatever problems they had are now solved, thanks to mama Dobrev.

‘Vampire Diaries’ actor Ian Somerhalder arriving on a flight at Ronald Reagan Washington National Airport on June 23, 2014 in Washington D.C. Rumor has it that Ian and his co-star Nina Dobrev are dating again!