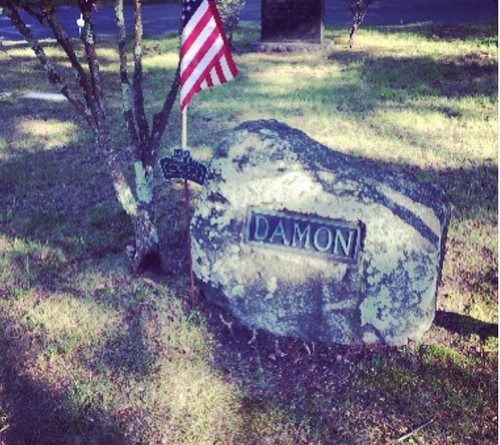 Remember when the final scene of this season’s Vampire Diaries played out and the screen went white leaving viewers to contemplate whether or not Damon Salvatore had actually died? Well, Ian Somerhalder decided to tip his hand regarding his beloved characters’ fate posting a photo on Twitter of Damon’s headstone and declaring it “game over.” Diehard fans of the CW’s hit show are collectively already grieving the loss of Damon but his portrayer may actually be kind of happy about it.

We have already told you all that Ian’s romance with costar, Nina Dobrev is most definitely back on again and we’ve heard that they are getting engaged in Europe this summer – so perhaps not working together is actually in their best interest. The two dated exclusively for nearly three years before originally splitting up last spring and having their romance under the microscope of the fans and media was said to have played a huge part in their unraveling. They have since very quietly reconciled and have gone back to what originally worked for them- a private relationship on the DL.

While Ian has been very grateful for his role on Vampire Diaries it’s also pretty obvious that working of different projects will make it easier for Ian and Nina to keep their personal lives under wraps. It had to be hard to work together every day while guarding against having private moments photographed or documented by the press. This frees Ian up to move on to different projects and it probably will take a bit of a weight off of the couple’s romance. Are you sad to learn that Damon is really dead? Tell us your thoughts in the comments below!