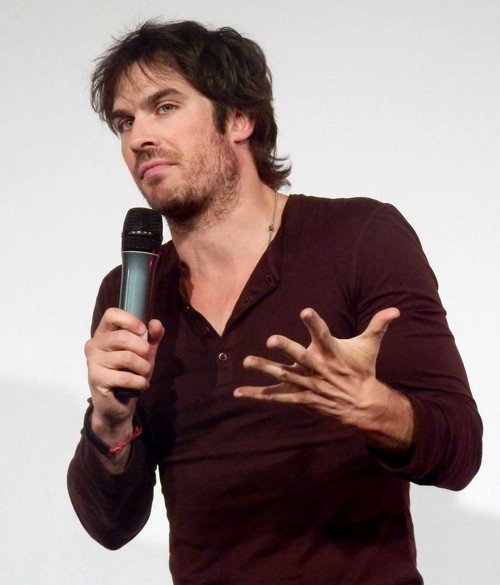 It’s not uncommon for actors to request an early departure from their show before their contract is up, and often times, the showrunners and producers will oblige their request rather than keep an unhappy actor on set. And honestly, Ian Somerhalder‘s situation on The Vampire Diaries seemed very much in line with this, although I doubt we’ll get confirmation either way. Since we’ll be discussing the latest developments on The Vampire Diaries, keep in mind, there are SPOILERS ahead.

So for those who have not yet caught up on the show, Ian’s character on the Vampire Diaries, Damon Salvatore, went kaput on the fifth season finale of the show. There’s one season left on all the principal actors’ contracts, but we’re hearing that Ian may have requested an early leave from the show – both for the sake of his burgeoning film career and the residual awkwardness from his on-again/off-again relationship with on-screen love interest, Nina Dobrev.

It’s extremely unfortunate for the show that the two embarked on a torrid on-set romance, and then proceeded to have an equally difficult breakup. Although the two tried to remain professional throughout all the awkwardness, sources close to the show’s production claim that they were never fully comfortable with each other after their split – and it shows in their scenes together. Producers didn’t want to risk jeopardizing the fandom even further, and when Ian requested that his character be killed off early, they didn’t hesitate to jump ship.

Of course, there’s also other factors involved in killing off Damon on the Vampire Diaries. First of all, he may still be making guest appearances on the next season of the show – perhaps as some entity from the beyond – so he’s not really gone. Plus, Nina reportedly turned down Ian’s advances to get back together, and that hurt his ego enough that he didn’t feel like he could do scenes with her without letting their emotional baggage get in the way. This way, everybody wins.