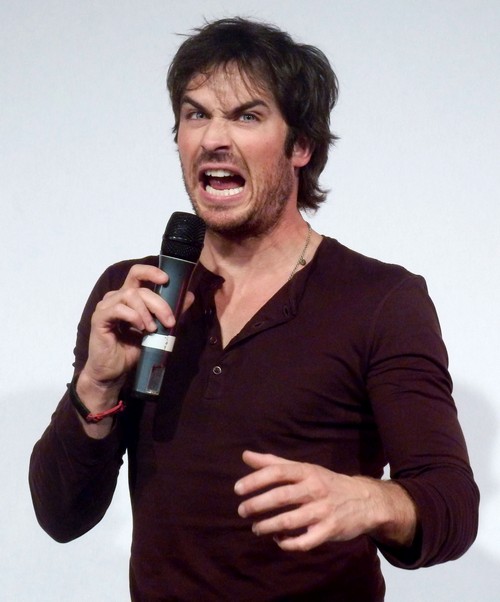 Nina Dobrev and Ian Somerhalder are well on their way to becoming the most talked-about couple on television. But if they don’t get back together in real life, how will that affect the dynamic of their relationship on-screen?

The Vampire Diaries is ending its fifth season and continuing onto its sixth season, but the future of the show is uncertain at that point. We know that there’s no way the CW will want to cancel the show, considering its one of the network’s most consistent shows. However, all the actors are reportedly only signed on for six seasons, and it will take some cajoling [and huge raises] to bring them back. However, will that work with the lead trio, who have expressed their interest in trying other things?

Ian and Nina, in particular, have bright prospects in the movie world, and I can see how convincing them to stay might be difficult – especially with their complicated romance off-screen. Nina might stay, especially since she’s still young and is just building her film career, but Ian will be a lot more difficult to persuade. Plus, there’s the whole issue of him wanting to get back together and settle down with Nina, and her… not exactly wanting the same things as him.

She’s young, so you can’t blame her for wanting to play the field and hook up with a bunch of attractive dudes. And I don’t think she’s ready to settle down right now, which was probably one of the biggest factors in her initial breakup with Ian last year. But now that they’re reportedly hooking up again, what will Ian do if Nina refuses to remain in a committed relationship with him? He has the ability to leave the show next season, and even if they offer him a huge raise, I don’t see him taking it if things are still this complicated with Nina – especially if he has to bear the humiliation of her rejection.

Ian Somerhalder, Malese Jow, Nathaniel Buzolic and Zach Roerig at day 2 of ‘The Vampire Diaries’ Q & A during the BloodyNightCon 4 Fan Event in Barcelona, Spain on May 18, 2014. Ian walked on stage with his zipper down and didn’t realize until a fan told him