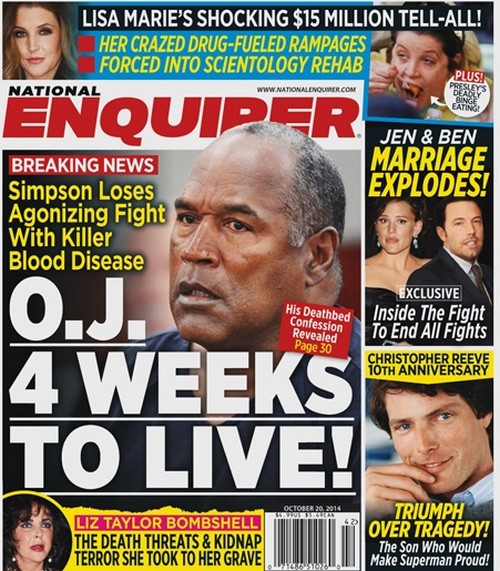 OJ Simpson has been withering away in jail for the past few years, and he’s tried everything he could think of to get himself out of it. He’s tried plea deals, he’s tried hunger strikes, and he’s even tried bargaining his way out of a sentence. But alas, OJ Simpson was guilty for more than just armed robbery, and since everybody and their mother knows it, there’s no way that OJ’s getting an ounce of leniency in regards to his proceedings. And in a dose of karmic retribution, OJ Simpson reportedly has only four weeks left to live.

The latest cover issue of The National Enquirer claims that O.J. is battling a ‘killer blood disease’, and not only that, but he got it after having sex with a transsexual in prison. The Enquirer reportedly tracked down this person, going by the name of Jazmena Jameson. This Jazmena decided to ‘reveal’ the truth about OJ, explaining, “I could have given O.J. AIDS!” Then, OJ Simpson apparently confided in a friend, stating, “I feel the end coming. But I don’t want to die in prison like common scum.”

Well, you may not want to be some ‘common scum’ OJ, but that’s how you’re regarded right now. I wouldn’t be shocked to find out that OJ Simpson really did have a serious blood disease that was killing him, since his health hasn’t been doing so hot lately. Even if he didn’t have an affair with a transsexual while in prison, the guy’s doomed to die in jail – whether four weeks from now or four years from now.

The Enquirer also has a feature on Ben Affleck’s exploding marriage to Jennifer Garner, especially after Ben’s gambling addiction, his drinking, partying, and supposed cheating. Plus, the guy’s more or less abandoned his family to go run off and campaign for an Oscar each fall, while Jennifer has to stay home and play dutiful mother. Of course they’re fighting. I’m shocked that they’re still together, but I guess Jennifer doesn’t want to get rid of all that political capital she’s gotten in the industry.