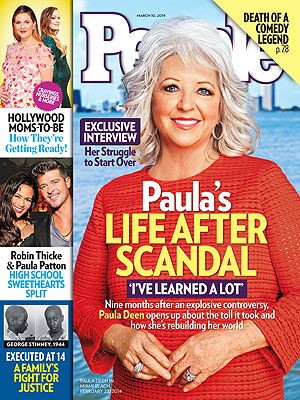 It’s been nine months since Paula Deen made headlines with her usage of the n-word and its ensuing controversy, and she’s since spent most of the last year trying to repair the damage to her reputation. Seriously, only in this country do racist millionaires always get second chances.

Paula tells People, “When I woke up each morning, it was like my world was crashing down again. I’m fighting to get my name back. I used to have dreams that I lost everything. And when it finally happens, you think, ‘I’m still alive.’ ”

Really? She still has most of her wealth, and she has a family and close friends, even if some of them deserted her after the scandal. How is that ‘losing everything’? At 67 years old, most people are near retirement, and Paula was still going strong. Not being able to continue wouldn’t constitute a huge loss, it would consist of involuntarily early retirement.

People’s cover issue also has a feature on the biggest breakup story of the week, between ‘high school sweethearts’ Robin Thicke and Paula Patton. I guess when they met all those years ago, Paula never predicted that the man she married would end up being one of the sleaziest cheaters in Hollywood. They can both deny it all they want, and maybe they did have an open marriage, but it’s still a pretty unsavory move to publicly grope a fan while taking a picture – and then refusing to own up to it.

What do you guys think about Paula’s fight to reclaim her reputation? Will she succeed, or has too little time passed for everyone to forgive and forget? Let us know your thoughts in the comments.