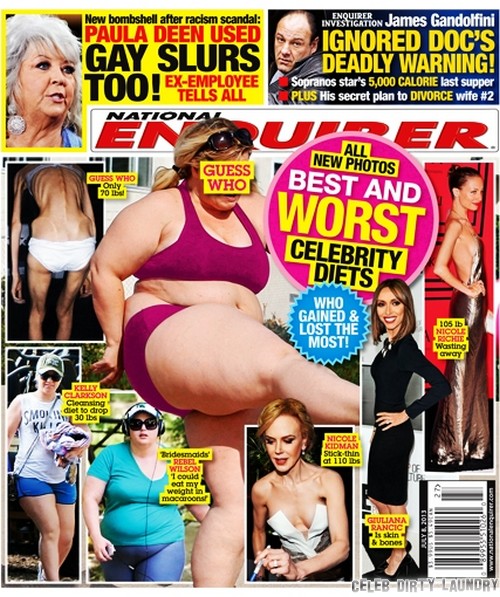 Well, I guess if Paula Deen finds away to climb out from beneath the growing scandal surrounding her admitted use of racial slurs, she can then move onto the next round of accusations. A former employee of Deen’s has seen her crocodile tears and half-assed apologies and decided to speak up. The July 8th print edition of National Enquirer has all the dirt on Deen’s other verbal blunders. The former Food Network star is apparently also a fan of gay slurs and this ex-employee is giving lots of details to bolster their claims.

According to one of Deen’s friends she has a raunchy sense of humor and likes to say things to see what reaction they’ll get. I’m guessing even if she had been kidding around this is not the sort of public reaction that she was looking for. Someone that has spent years in the public eye has to realize that words and deeds can always come back to haunt them. I’m sure that Deen is chock full of regret now and I suspect this story will only get uglier before it dies down.

Also in the latest issue of National Enquirer you can catch up on the latest on the tragic death of James Gandolfini. According to inside sources, doctors had warned the beloved actor to watch his food intake and to cut back on his hard partying ways. It seems his family has learned the hard way that prolonged overindulgence can be deadly.

Equally deadly are some of the crazy diets that Hollywood celebs try on for size. National Enquirer offers a round up of who is packing on the pounds and who is starving for attention within the pages of its’ July 8th print edition.

Do you think Paula’s troubles will leave and she’ll remain popular or is the continuing scandal simply too much to come back from? Tell us your thoughts in the comments below!