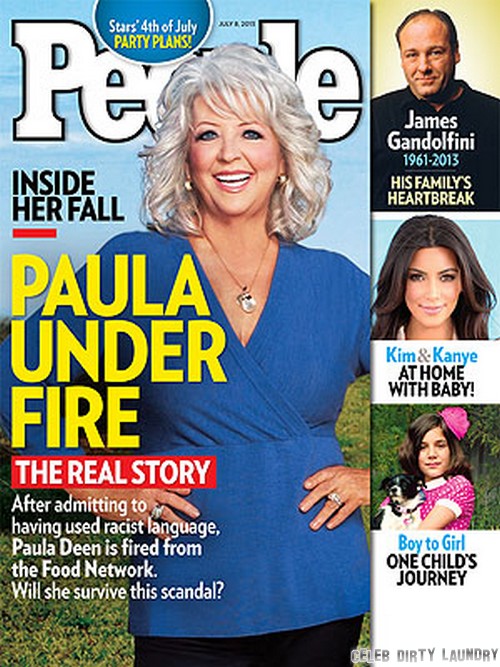 Yes indeed, Paula Deen admits to letting the N-word fall from her lips. When she was deposed last month she admitted to saying it on more than one occasion and those close to her say that she has a pretty wicked sense of humor, that has often included saying things simply for shock value. This week’s People Magazine has the latest on Paula’s scandal, including how the once megastar chef is coping with the fact that some of her biggest financial backers, including Food Network, have now dropped her.

The magazine interview was just the first official stop on her publicity tour to try and save face as well as her crumbling empire. Paula also dropped in on The Today Show this morning leaving viewers with a widely mixed reaction. Her fans remain her fans, but the rest of us heard a bit of double talk.

She admitted under oath to using the N-word on various occasions but this morning she insisted that she only said it once, 30 years ago. Double talk isn’t going to get her anywhere and according to those close to Paula she is devastated that having lose lips seems to have left her reputation in tatters. She would have been better off just owning the missteps and saying that her sense of humor can be inappropriate and apologizing. The more she tries to over explain, the more the whole situation begins to reek of total desperation.

Do you think Paula truly regrets using questionable and offensive language or is it just a case of hating in which she has been caught? I tend to think she has no issue with her colorful and disrespectful words, she just hates that others are offended by it all. Will Paula’s empire remain intact? She claims not to care about the money and it’s her smudged reputation that stings. Do you believe her? Tell us your thoughts in the comments below!