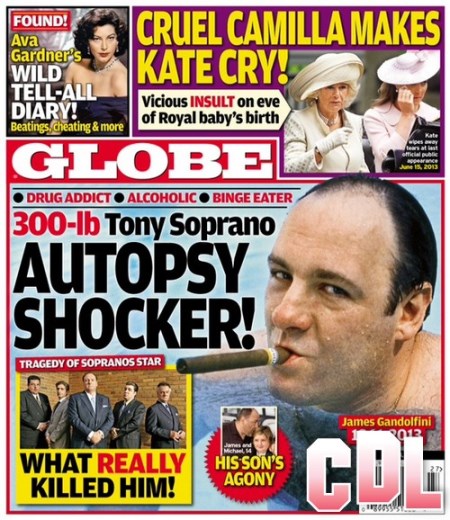 Hollywood was absolutely gutted last week when news broke that James Gandolfini has suffered a massive heart attack and died while vacationing in Rome with his 13-year old son.  He shot to fame a bit later in life after spending years honing his craft in bit parts. Gandolfini’s portrayal of Mob Boss Tony Soprano brought him fame as well as respect from Hollywood’s most elite. It also ensured that once the hit HBO series wrapped in 2007 Gandolfini could continue acting in various projects.

According to the July 8th print edition of GLOBE, when a family friend announced that nothing raised any red flags in the actor’s autopsy it wasn’t exactly true. Gandolfini was well known over the years for his excessive vices, including alcohol and food. Then there was that cocaine addiction that prompted the actor to head to rehab on at least one admitted occasion. We know that a few hours before his death Gandolfini downed several drinks and ate heavy Italian food, both were fairly common for the actor in his final days. According to a source he had been going to Alcoholics Anonymous meetings in NYC but didn’t seem too serious about getting sober.

The GLOBE is reporting that the initial autopsy report includes some shocking results – and even if it hadn’t we’d still be waiting several weeks for the toxicology report to come back before knowing with certainly what caused Gandolfini to die in his hotel bathroom. In the meantime I’m pretty sure you’re going to want to grab the July 8th print edition of GLOBE to find out the latest info which clearly has yet to be reported in any other place!  You can count on GLOBE to tell you the unvarnished truth – even though we all love James and are so sorry he is gone we know GLOBE will let us know what really happened!