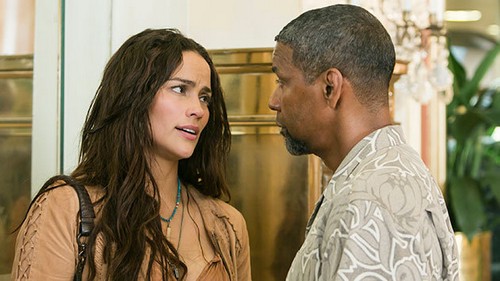 There has been speculation for months now about Robin Thicke’s fidelity to estranged wife, Paula Patton. We watched him seem to enjoy Miley Cyrus’ twerk-filled VMA performance last summer and in the months that have followed Robin hasn’t exactly kept his hands to himself. He has been caught with his hand in the cookie jar that at one point we were even told that he and Paula may enjoy an open marriage. Of course now we know that it’s simply not the case and that Paula has been fed up with his flirtatious behavior for a long time now. She agreed to roll through awards season with him and then promptly informed the world that they were dunzo. But has she been an angel?

Well, according to the March 24th print edition of National Enquirer long before we watched Robin throw is marriage away Paula may have been having an affair of her own with none other than Denzel Washington. The two first worked together back in 2006 but when they paired up last year for 2 Guns word from the set was that their relationship was anything but just professional. They simply weren’t carrying themselves like 2 married people.

Denzel is rumored to have jumped at the chance to reach out to Paula when news of her separation broke leading some to wonder what the real deal is between these two. Denzel has been in the doghouse with his wife Pauletta repeatedly in recent years and this situation could explode in everyone’s face. If Denzel is hauled in to testify in Paula and Robi’;s divorce the end result could be a disaster for two marriages. Do you think that Paula and Denzel have hooked up? Tell us your thoughts in the comments below!