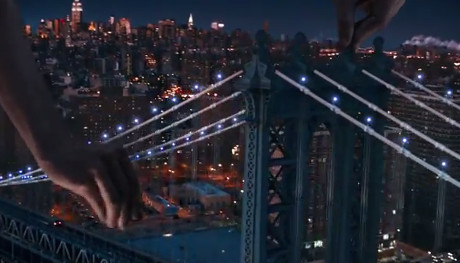 We’ve been spreading the word regarding Pepsi’s promotion and sponsorship of the 2014 Super Bowl a lot lately, but that’s only because we love the stuff they’re doing! The Super Bowl airs this Sunday and Pepsi will invite everyone into the telecast with a brief intro clip that exudes NYC pride and musical energy. From the Manhattan Bridge being strummed like a guitar to the Guggenheim being thumped like a drum, Pepsi’s coveted lead-in spot is sure to get fans hyped up for both the game itself and the incredible half time show, sponsored by Pepsi.

Here’s some more about the clever video that has us all tingly and excited for Sunday’s big game: “A tribute to New York City, the spot features a clever musical twist. From strumming the Manhattan Bridge, playing the Guggenheim “drums”, mixing levels on a NYC subway train board, turn-tabling Columbus Circle, lighting up the Empire State building, highlighting the iconic East River Pepsi-Cola sign, and ending up at MetLife stadium, New York is transformed into musical ensemble.”

Pepsi has been working hard all month long to get fans hyped up for the 48th Super Bowl Halftime Show. In fact, just recently we had the wonderful opportunity to chat with Kelly Hansen of Foreigner about their surprise performance at Buffalo Wild Wings — which was a big effort to, once again, get people hyped up for the amazing energy that’s sure to be present at the live halftime show come Sunday. CLICK HERE to read our interview with the rocker.

After watching the clip below, be sure to tell us what kind of food you’re planning on making for your party guests! Hit up the comments below . . . . We want to hear all about your PARTAAAYYY plans!