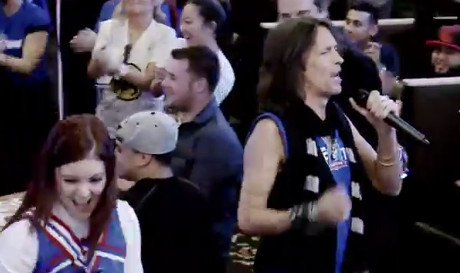 The rockin’ remix was performed at a New Jersey Buffalo Wild Wings in a surprise gathering that left customers stunned. We were so excited to watch this video — and our excitement doubled when we learned that Kelly Hansen, lead singer for the band, was welcoming interviews. As if the Rock Gods were smiling upon us, Kelly gave us a great interview just moments ago and shed light on the band’s collaboration with Pepsi and some of his greatest Foreigner moments.

He said that the energy in the room at Buffalo Wild Wings was amazing and, because they had to do so many takes to get the video just right, more than one audience was used over the course of the shooting. Kelly admits that it was great to see the new floods of people and, likewise, the new reactions of surprise that lit up guest’s face when he and the band paraded into the dining area. If you watch the wonderful video below, you’ll see diner’s eyes open big and wide, and some look at their friends and family in disbelief. The kind of disbelief that says . . . OMG is Foreigner really in my Buffalo Wild Wings right now? In other words, spicy wings were definitely dropped.

I’ll admit, I did have my doubts while watching the video, wondering if the fan reactions were real; I was so excited to learn that the interactions between the performers and the audience members were genuine. Nothing was staged. “Yep, it was all true,” Kelly reveals. “The energy in the room was great,” he said, “watching everyone sing along to our song was an amazing experience.” He also said that, given people’s proclivity to jump on their Instagram, Facebook, and Twitter accounts (How could you not want to tweet about a surprise Foreigner jam!), it was hard to keep the whole project under wraps until the time of the big reveal. In the end, however, everything worked out wonderfully and he couldn’t be prouder of the  project he, the band, and Pepsi put together.

When asked who he thought would be the big winner at this year’s Super Bowl, he said, “Aw, man, I’m probably not the best person to answer that. In fact, I’ll probably be on a plane when it airs!” We love his honesty. But just because he’ll be on a plane doesn’t mean he won’t be with the two teams in spirit; he revealed he has a small connection to the Broncos and it would seem that, if he does have a favorite pegged to take home this year’s coveted trophy, part of his heart’s with Denver!

As many of you know, Foreigner is a band that’s recognized and loved all across the world. Kelly says he and the band have performed in over 65 countries. Being that everyone here at CDL is a travel lover, I thought it only natural to inquire about his favorite international tour destination (or at least one that sticks out in his mind). While he admits there are so many places that have left an impression on him and his character as a musician, playing “at the foot of Mount Eiger in Switzerland was definitely a highlight.”

We’d like to thank Kelly for taking a few minutes out of his day to chat with us. Before hanging up the phone, Kelly told us to “Keep rockin’ on,” and we expect you, lovely readers, to do the same — especially as we near the epic Super Bowl weekend! For more information on Foreigner, check out their website for all things band related, including their upcoming European tour dates and other exclusive project announcements. Also, find them on Twitter and Facebook.