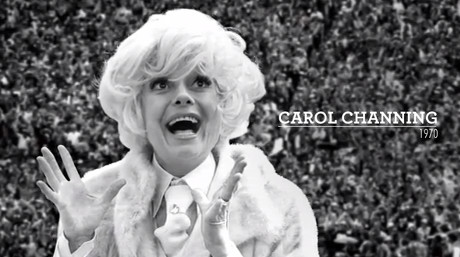 Can you believe Super Bowl XLVIII is almost here? The 2014 Super Bowl halftime show — the most important part of the big day (aside from the commercials, of course) — will feature Bruno Mars in a wonderful performance sponsored by Pepsi. So when we get to see Bruno Mars tear up that stage, we’ll have our favorite fizzy drink to thank for the spectacular goodness. While we still have 15 days to wait, Pepsi thought it would be fun to take a look into the history of the bowl game and revive/recreate the incredible performance that featured the legendary Carol Channing.

Carol is celebrating the 50th anniversary of Hello Dolly, the popular musical, and she’s also reminiscing on her own Super Bowl Halftime Show performance — which took place at the fourth Super Bowl back in 1970.

Pepsi teamed up with Carol to shoot a video reliving her New Orleans halftime performance. The video is all kinds of adorable and is a perfect way to wrap your arduous work week. If you don’t feel any warmfuzzies after watching this clip, well, then we might need to have Shia LaBeaouf knock some sense into you.

Watch the video below and let us know how excited you are for the upcoming game, which airs February 2nd, 2014!

About the video: Pepsi tracked down Rory O’ Connor, a passionate fan who went to Super Bowl IV. Check out what happens when he experiences the #halftime performance of a lifetime—for a second time. Then, tune in to the Pepsi Super Bowl 48 Halftime Show with Bruno Mars, happening on February 2nd, 2014. Get Hyped for Halftime!