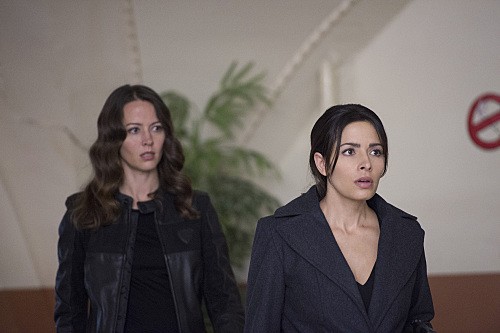 Tonight on CBS Person of Interest continues with an all new Tuesday November 25, season 4 episode 9 called, “The Devil You Know,” and we have your recap below.  Tonight, Reese [Jim Caviezel] and Finch [Michael Emerson] get caught in a power struggle for control of the city’s gangs when Elias is targeted by Dominic, the leader of the Brotherhood. Meanwhile, Root and Shaw disagree over how to handle a new threat from Samaritan.

On the last episode, Reese volunteered as an NYPD police academy instructor in order to keep an eye on a talented young officer whose suspicious actions make him question her motives. Meanwhile, Martine – armed with information from Samaritan – hunts a member of the team. Did you watch the last episode? If you missed it, we have a full and detailed recap right here for you.

On tonight’s episode s per the CBS synopsis, “Reese and Finch are caught in a power struggle for control of the city’s gangs when Elias is targeted by Dominic, the ambitious leader of the Brotherhood. Meanwhile, Root and Shaw disagree over how to handle a new threat from Samaritan.”

Shaw’s cover as a behind the counter perfume girl was blown on tonight’s episode of “Person of Interest”. The operative Samaritan had sent after her didn’t seem to care about casualties when she opened fire on Shaw in full view of an entire department store.

Luckily, no one was injured. Including Shaw who got help from Root in escaping the never-ending gunfire. Finch had sent in Root when it began to look like Shaw could fight this battle on her own. But, and more importantly, the Machine hadn’t picked up on the threat to Shaw. Her number hadn’t come up and so the team now knows the operatives that Samaritan have been sending also have the ability to navigate in the shadows.

And before that, they thought the shadows were thing!

When Reese found out about the threat to his friends, he wanted to go and help them.  But Finch told him to stay put. What Reese was doing was just as important. Reese was following the great Elias around. Elias’ number had come up and the guys had theorized Dominic was going to be making his move soon. And, really, in the long stretch they rather deal with Elias than with Dominic. After all, he’s the devil they know.

However Elias originally didn’t want help. He was actually quite scornful about accepting it. It seems Elias thought he could handle someone like Dominic on his own. Particularly as Dominic was a new up and comer meanwhile he’s been playing this game for over twenty years.

Yet Dominic surprised Elias by turning some of his key people. Apparently once certain people learned they could keep their domain in the new empire that Dominic was building – they were quick to turn on Elias. And as for Elias, he didn’t know how much he had underestimated the other man until even his last safe hold ended up being compromised.

Elias uses an accountant. A very special accountant that happens to run the business for Elias if he’s ever out of the country or thrown in jail. So Elias tried to go to his accountant at the first chance he got. And like Dominic knew he would.

Although interferences kept cropping up. Elias’ most trusted man, Anthony, was taken hostage. And regardless of his reputation, there are some people Elias cares about. Elias couldn’t leave a friend in trouble and Dominic had reached out to him. Dominic told Elias he wouldn’t hurt Anthony and that he would leave the Reese alone if Elias turned himself in.

So that’s what Elias wanted to do. He knew if he did so Dominic would kill him but he didn’t care. Anthony had saved his life more than he could count. And he wanted to return the favor.

And the same goes for Shaw. With her cover blown, Finch wanted her to come back to headquarters without delay. But she had heard about Reese. And she didn’t want to leave him alone in a gang war. So Root had to knock her out just so she wouldn’t cause trouble.

There are simply things you do for a friend. Whether it’s entering a war or drugging a stopping a friend from entering a losing battle. And Elias understood that. He eventually escaped Reese’s protection in order to turn himself in.

The deal was Anthony would go free the second Dominic had Elias. But Dominic changed his mind when he finally got his hands on Elias. Once he had what he wanted he then wanted more. Dominic wanted Elias’ code to his vault. It was at the same place where they were holding Anthony and he swore the other man would be free after he got his hands on whatever was inside the vault. Yet neither Anthony nor Elias believed him. Fool me once and all of that! So Anthony gave his boss permission to open the vault. And Dominic’s men found a bomb waiting for them inside.

A lot of Dominic’s men were killed in the following blast. And sadly Anthony died as well. Though Dominic never got his revenge because Reese had come back for Elias in the final hour.  And he saved Elias from going the same way as his friend.

Elias appreciated that but he was still in general a hard man to deal with. And that explains why Elias decided to warn Finch and Reese about what he was set on doing. He told them he was going to take down Dominic by any means necessary and that the guys could either be a part of the solution or be in his way.

And we all know what happens when you’re in his way!

Elias was planning on getting revenge for Anthony and when he did meet up with his accountant – he told his second oldest friend in the world to lay low. He didn’t want to involve him in what he was about to do next.

As for Dominic, he wasn’t concerned about chasing Elias down. Running the other man out of New York was enough for him. And what truly mattered to Dominic was getting to the people that have been secretly helping Elias all along! People like Reese and Shaw!