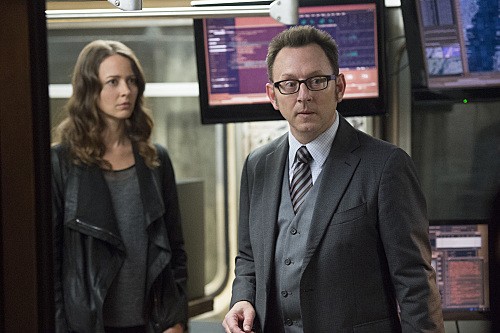 Tonight on CBS Person of Interest continues with an all new Tuesday December 16, season 4 episode 10 called, “The Cold War,” and we have your recap below. Tonight, Samaritan shows the extent of its power by erasing crime from New York City for a day in a bold attempt to force the Machine out of hiding.

On the last episode, Reese and Finch were caught in a power struggle for control of the city’s gangs when Elias was targeted by Dominic, the ambitious leader of the Brotherhood. Meanwhile, Root and Shaw disagreed over how to handle a new threat from Samaritan. Did you watch the last episode? If you missed it, we have a full and detailed recap right here for you.

On tonight’s episode s per the CBS synopsis, “Samaritan shows its power by erasing crime from the city for a day in an attempt to force The Machine out of hiding.”

This is definitely one series that you don’t want to miss. Don’t forget to stay tuned to Celeb Dirty Laundry where we will be blogging every episode of Person of Interest’s fourth season.

Lionel calls Harold and tells him to tell Reese that his WitSec woman got killed. Lionel says if he gets to who did this, to take it down. Harold says he was able to rescue one victim but there was still an explosion. Root says they’ve lost seven numbers and Sam says they need to have the sit down with Samaritan. Harold says it could be worse if the two gods go to war. Root says the machine gave her a message that said – it’s time.

Back in 73 again, we see Greer with Oleg. He lights a cigarette for him and talks to Oleg. He says he had a friend that spent a few weeks in Cuba turning a contact but ended up addicted to heroin. He says he kicked the habit and recruited the asset. He says he was the finest operator he ever worked with. He says that man was the man Oleg just killed.

Oleg says he’s sorry about that and Greer says he’d like them to be friends however briefly it may be. Oleg says he’s doing his job just like they all are. Greer asks how he recognized two experienced MI6 operators. He asks if someone told him they were coming. He says he’s seen their faces before. Oleg says he’s KGB and MI6 too. He asks who recruited him and he says Deputy Chief Blackwood.

Greer asks why Blackwood would want him dead and asks what he’s hiding. He tortures him a little and says Blackwood is like him – MI6 and KGB too. Greer is shocked to learn his boss is a double agent. Greer asks who else knows and Oleg says just the KGB and him. Greer tells him where he can find a hospital nearby and says he can make it there.

Oleg asks why he’d let him live and Greer says he no longer takes orders from MI6 and walks out. Now, Greer calls someone and says it’s time. We see Lambert in a church pew and Root pulls a gun on him. He asks if it’s sacrilegious. Then Martine is right behind Root with a gun to her head. But then Reese is there with a sniper rifle and shuts down Martine’s threat to kill her to get to Sam.

Lambert says it’s time to put down the guns and let the real players in this game have a chat. Martine puts hers down, then Root then Reese. Lambert hands Root the address and says only two people are incited and he’s not one of them. Martine makes a gun gesture at Reese as she and Lambert leave. Sam is panicking over Root going to the meet without backup.

She’s packing up stuff to go back her up and Harold says Root thinks the machine will protect her. She says they’re hiding underground while one of their own walks into certain death alone. Harold says Root is not alone. Greer asks Lambert about the meeting with Root. He asks why Greer isn’t using him as the intermediary and Greer says he imagines Samaritan has found someone more appropriate.

Root goes to a school and finds a kid at a desk. His name is Gabriel. Root says it’s clever to use a young boy as your avatar. Samaritan says this boy has hacked into DARPA and the DOD. Root asks what she wants. Samaritan says she must have done something to her hardware since she can’t see Root sitting in front of her. The machine says they need to leave people alone.

Samaritan says this world is a cesspool of greed, hunger and poverty. The machine says you can’t change human nature and Samaritan says she can shape their reality. Samaritan tells her she’s going to destroy her and says the only question is if she’ll let her human agents die with her. Back in 73, Greer comes back to the office to see Blackwood. He creeps up on him.

Blackwood tells him he startled him and says he’s sorry his colleague died. He asks Greer what he did with Oleg’s body and Greer asks if he ever gets tired of lying. His boss says they’re spies and it’s the work. Greer says he told Oleg to bugger off and let him go. Blackwood says that’s treason and reaches for the phone. Greer pulls his gun and says he knows he’s a traitor too.

Greer says he always knows when people are spinning tales except for him. Blackwood asks if he’ll kill him and take his job and Greer says – far from it. Greer says the lines we draw in the world are illusory. Greer says one day these invisible lines will be erased and there will be no walls between nations. He kills Blackwood and picks the lock to his desk to retrieve a file. It’s his own file. He burns it and leaves.

Samaritan says she wanted to see inside the mind of a fallen God to learn from their mistakes. Samaritan asks if the machine will give her life to save her human agents. The machine says they share her belief that the world belongs to the humans. Samaritan says – so be it. Reese meets with Lionel who tells him three more WitSec people are dead. He asks who did it.

Reese hands him a list of names and says those are people in danger and they need to split up to try and protect them. Sam watches the news and says it’s time for her to get off the bunch. She pets the dog who whines and says she’ll be back. She heads out. Greer tells Lambert that Samaritan is planning something for the whole world to see that will start a new era where human fallibility doesn’t matter.

Harold comes back then panics when he sees that Sam is gone. He calls Root and says the meeting ended in an impasse. He tells her that Sam is gone and she asks where. He says he think she went to help with the numbers. Root says the machine has sent her to Wall Street but she’s not sure what it means yet. We see a virus has been installed that is crashing the stock market. Greer goes to the window and looks outside. He smiles.