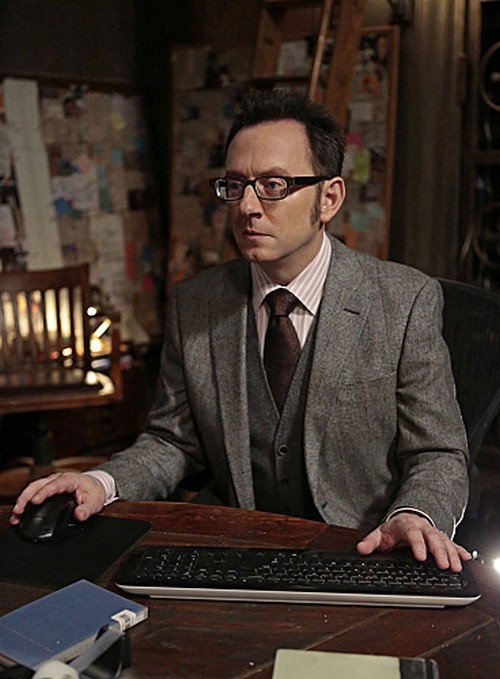 PERSON OF INTEREST returns to CBS tonight for another exciting episode.  In the oddly titled “/” the Machine tasks Root to find a janitor who has a mysterious past. However, when her presence endangers him, the Machine sends his number to Finch as well.

On last week’s episode of PERSON OF INTEREST the secrets of Finch’s operation before he enlisted Reese were revealed, including shocking ties to present-day events.  Did you tune in to last week’s episode?  If not then we have a full recap right here to bring you up to speed.

Person Of Interest is a crime thriller about an ex-CIA agent and a mysterious billionaire who prevent violent crimes by utilizing an all-seeing machine that can predict the events before they happen by supplying the social security numbers of those involved. Although they have successfully prevented numerous crimes thanks to The Machine’s omniscience, Reese and Finch, along with NYPD detectives Carter and Fusco now face an uncertain future.

Tonight’s PERSON OF INTEREST Season 3 Episode 17 is going to be exciting, and you won’t want to miss it. So be sure to tune in for our live coverage of the new episode — tonight at 9PM EST! While you wait for our recap, hit the comments and let us know how excited you are about the show.  Don’t forget to come back at 9 PM for our LIVE recap!

The Machine is always using Root for her dirty work although no one would have expected that it would order Root to break out a criminal.

Root staged an operation involving a transportation bus. She had lain down in the street and the moment bus carrying several criminals stopped just short of running over her she then took out the guards. All of this was to get one guy off the bus, but it’s not as if she wanted him for long.

She used his passable resemblance to someone else to intercept a package and then allowed her car thief to get taken back into custody. Though she did give him some advice on how to survive on the inside. Root told him about a guy he needed to befriend and then said her goodbyes.

Root’s next stop was picking up a lowly maintenance worker. The machine hasn’t given her idea yet on what she’s supposed to do with him, but it’s definitely dangerous. Cyrus Welles’s number came at the exact moment she approached him. So it wasn’t long before she spotted Finch following them.

She thought Finch had come for her when he just wanted to warn her. Whatever she’s going to use this man for is going to get him killed. Finch was hoping if Root knew what she was doing then she would put a stop to it. Though it appears he bet on the wrong horse because Root is prepared to make sacrifices. She’s proven that when she let Control take her hearing from one of her ears.

Welles was barely in her custody a day before snipers started shooting at him. Vigilance was the first to try and kill him and they only wish do so because his name appeared on some mysterious list. A list belonging to Decima! Root and Shaw got him out of the situation safely but who is Cyrus Welles?

He was a millionaire and had gotten rich by the time he was 35 and yet his circumstances have changed since then and he’s reluctant to discuss why. In the meantime Root made sure to hide him with the police while the POI tries to figure out why he’s such a big deal.

Two dangerous organizations want to kill Welles and they’re prepared to break into Fusco’s station in order to get him. Root had first placed him with the police believing it was the safer option over what she could provide. Though she quickly changed her mind after she learned a massive armed force was heading to collect him. So she arrived at Fusco’s doorstep carrying a warrant of all things.

She claims it’s not a fake (seeing as she joined the FBI) and it did check out and Fusco was forced into letting Welles go. Back with Root, his chances of survival haven’t improved, but he does finally answer some questions about his past.

Welles had started a company with a few of his friends and it had made them a lot of money. And then one day a shooter came into their office and killed nearly everyone. Only Welles was able to walk away that day and afterwards he reevaluated his life. He no longer wanted to devote his life to his bank account and so he gave all of his money to a charity and started working on something he thought gave more back.

He doesn’t realize his past is hard to hear for Root. Nor does he catch on to how she flinches when he tells her that his past was all part of God’s plan. She knows the truth behind the attack that and it wasn’t fate. Though she never got the chance to explain to him – he was kidnapped moments later. The Machine usually helps her stop something like that happening; only this time she couldn’t really hear it out of her one good ear.

There wasn’t much Root could do. Reece was also nearby and he couldn’t even stop the men from taking Welles. Earlier he warned Root that Welles was safer with him and she wouldn’t listen. So now that’s weighing on her. She second guesses herself in front of Finch wondering what she could have done differently.

The people that took Welles don’t want him because of his past. They want him for what he access to now. Welles is the only maintenance member at the office he works at that has access to a top secret high functioning computer.

Decima wants the processor from that computer and Vigilance wants to stop Decima from having it. Shaw was able to fend off Vigilance’s people though it also meant she was too busy to help the rest of the guys fight Decima.

Decima were the people that bought the Samaritan after it was stolen, but they had a problem with getting it to work. The Samaritan couldn’t be run on a slow computer and none were fast enough to run until Welles’ employers suddenly built one. If Decima gets their hands on it then they’ll have a Machine of their own.

That’s where Welles comes in. They need his eyes for a retinal scanner and then they’ll most likely dispose of him. And Root couldn’t let that happen.

She got a doctor to put in a hearing aide in the malfunctioning ear. She needed the Machine back as part of her plan. Root wanted to do everything she could to save Welles and that inevitable lead her to denying to take the painkillers (it would have made her drowsy) or wait around to do testing (didn’t have the time).

Root, Reece, and Fusco charged the building. And while they were able to save Welles; the processor still was stolen. Decima has all they need to build their own artificial intelligence and soon they’ll be targeting the team.

But don’t expect help from Root. Once she made her peace with Welles  over being the assassin that almost killed him; she headed out for another mission the Machine had given her. Could there be something in Paraguay that stops Decima from running the Samaritan?

The team better hope so because as Root had said – the first four bodies Decima will use the Samaritan to find will be Finch, Root, Reece, and Shaw!