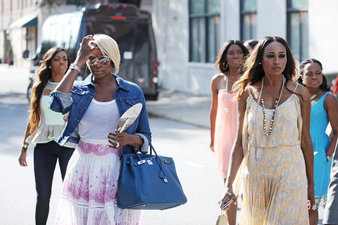 All hands in, band together now! The latest mumbling from the Real Housewives of Atlanta set crew is that all the ladies are threatening to quit if Bravo execs fire Porsha Stewart Williams, well all the ladies except one. Apparently Kenya Moore’s hands have steered clear out of this plan, most likely because Porsha’s hands were reportedly beating Kenya’s face at the reunion show taping not that long ago. In fact, the word on the curb is that Porsha’s Kenya beat down is the reason she is on the chopping block to not return next season.

According to TMZ: Sources close to the show tell us the women hatched their plan this weekend at Kandi Burruss’ wedding … telling the show’s producers how much they despise Moore because of all the drama she stirs up.

As we reported … Williams attacked Moore during taping of the reunion special … and producers may use the bitch fight as justification for giving Porsha the axe.

We’re told since the brawl, ALL housewives’ contracts for next season have been put on hold — until show honchos figure out what to do with Porsha.

But sources tell us the women have made it clear … they’ll walk if Porsha gets fired … and we’re told NeNe Leakes and Phaedra Parks are making a play to get Kenya fired instead.

Ha! Can’t say that this is surprising news to hear. Even though this show of unity was not entirely expected from the cast, it has been relatively clear that Kenya is not a favorite among the housewives. Kenya and her twirl have gotten on everyone’s bad side at some point since she joined the cast. From stepping on Cynthia’s toes at her modeling agency, stealing NeNe’s friend Marlo and getting too flirty/friendly with Phaedra’s hubby Apollo, Kenya has definitely lived up to being the resident “wild card” on the show.

Who can forget the way Kenya and Porsha fought in Anguilla last season? There was a lot of “b*tch” name calling on that island trip. Then there was the scene where Phaedra was questioning if she “should slap the dog sh*t outta” Kenya during the Mexico getaway. In many ways, it seems a small miracle that no one has put hands on Kenya up until now. Her antics have not gone unnoticed by much of anyone at this point. Still there is the undeniable fact that Kenya has helped to keep the show fresh and entertaining. In a lot of ways, her craziness has been a very good thing. There is also another undeniable fact; Porsha’s story line has been a little dull this season.

Not that it is Porsha’s fault per se. She can’t help it if her life is not entertaining and in many ways it is refreshing that she has not resorted to antics in order to spice things up like Kenya. This whole mess is honestly a tough call for Bravo, especially if this latest news is true. It seems like losing the entire cast but Kenya would not be good for the Atlanta Housewives franchise, but it is not clear that getting rid of Kenya is best either.

One thing we know, all of this news holds promise of an amazing reunion show for sure. CDL is quite curious as to your thoughts on all of this. Who do you think Bravo should fire, if anybody? How do you think all of the ladies threatening to quit if Porsha is fired will play into all of this? Help us wash this load out! Please share your thoughts in the comments section below.