Porsha Williams Speaks Up About Her Ugly RHOA Brawl With Kenya Moore In New Interview: I Felt Threatened! (VIDEO) 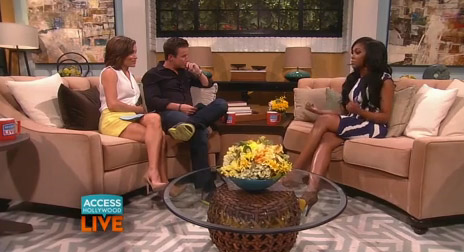 Porsha Williams is finally speaking out about her ugly brawl with fellow Real Housewives of Atlanta star Kenya Moore. She discusses the craziness in a new interview with Access Hollywood, which is set to air on Tuesday. In the interview, she admits that she sort of regrets assaulting Kenya — and she probably regrets it even more because she ended up being charged with battery. Whoopsie.

“I saw the hate. I saw the anger. I saw all of that in Kenya’s eye that moment. And I felt threatened,” she says. “For Kenya, she looks at this as a job. It’s a show to her. It’s just entertainment. So she doesn’t take anything seriously… Here I am living this real life and here she is portraying one.”

Porsha basically tells the show that Moore is a bully — and has always been a bully — and that the reason fans are standing behind her is because everyone’s always recognized this truth. She says, “Bullying can happen as an adult, it can happen as a child, in college, in your work place everywhere.”

Right before she starts to get emotional, Porsha says that she and the other RHOA cast members have a strong relationship, one that allows for them to pick up the phone and call each other after a rough day of taping and ask “hey, how do you feel today?” She claims that Kenya, however, doesn’t harbor this relationship with the other housewives, which perhaps makes Porsha the individual with whom the others are most likely to rally beside.

Watch the interview clip below. Let us know whose side your on!