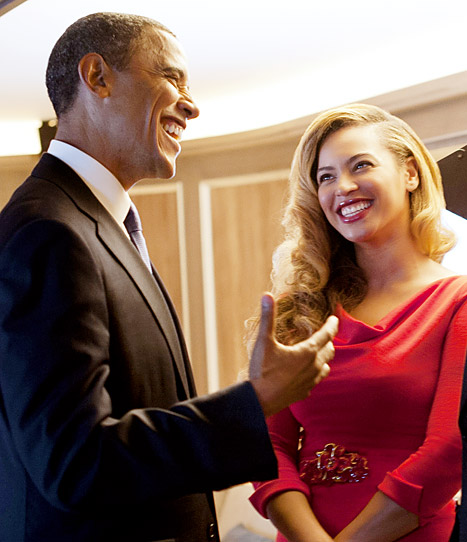 President Obama is not the biggest fan of Kim Kardashian and Kanye West, much like the rest of the country. He’s already called Kanye a ‘jackass‘, and he’s reportedly now turning down Kim’s requests to campaign for him.

Kim, even though she was very vocal in her support for Obama during his 2012 office run, was repeatedly turned down every time she reached out to the press office. A source explains to Radar, “Kim wanted to be a surrogate for the campaign, but they wanted nothing to do with her. She was not the young, cool, image they wanted to portray at all. Even though she kept asking, the campaign would never let her do anything in an official capacity. Kim is political poison. Having her involved in a political event or with a candidate is the last thing people who are serious about getting elected want.”

Oh, this probably made Kim and Kanye so, so angry. Not ‘young and cool’? They try so desperately hard to portray themselves as ‘young and cool’, including getting buckets of plastic surgery and constantly trying to connect with the youth. So much for all their efforts, huh?

Anyway, even though Kim’s star has risen since that 2012 presidential run, her clout in politics is still the same – as in, it sucks. According to Radar Online, Kim made a brief appearance at the Independent Congressional Candidate Marianne Williamson‘s fundraiser in Los Angeles this week. However, she reportedly failed to grab anyone’s attention, and worse, was treated as something that didn’t belong at the party.

Well, duh. She’s a freaking reality star who got famous off a sex tape. What business does she have, rubbing elbows and shoulders with the top-tier political crowd? Especially when she doesn’t know anything about politics or world events. Even worse, everyone knows Beyonce is a favorite of the first family!