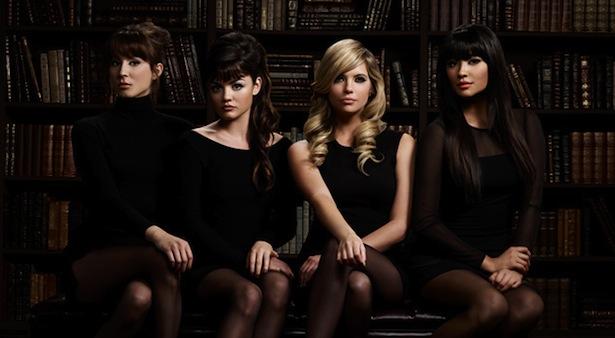 Pretty Little Liars returns to ABC Family tonight for its season 5 premiere. Tonight’s episode is called “Escape from New York.” On tonight’s episode in the fifth-season opener, a wounded Ezra heads the hospital, where Aria stays by his side because his knowledge about “A” puts him in additional peril. Meanwhile, her friends set a trap for “A” and are surprised by who wanders into it.

On the season 4 finale assuming that Mrs. D knew more about Ali and the night she went missing, girls decided to help out at her charity bridal fashion show to gain access to the DiLaurentis house to search for answers. Meanwhile, Ella and Jason returned to Rosewood, each with something to hide. Did you miss last season’s finale?  If you want to get caught up before tonight’s new season, we have a full and detailed recap, right here for you.

On tonight’s episode moments after where the season four finale left off, Aria and the Liars are reeling from Ezra’s shooting at the hands of “A.” The five girls quickly realize that as the one person who truly knows A’s identity, Ezra is in grave danger. While Aria stands watch over Ezra at the hospital, Alison and the PLLs lay a trap to finally flush out “A” but are shocked by who is ensnared.

The season premiere of PRETTY LITTLE LIARS is going to be really exciting and we’ll be recapping it for you right here. In the meantime hit up the comments and tell us who you think is really A!

RECAP: The Pretty Little Liars Season 5 premiere picks up where we left off after the Season Four finale. Ezra Fitz has been shot and is unconscious, he is rushed to the emergency room.

Alison, Emily, Aria, Spencer, and Hanna are still standing on the streets of NYC. Hanna calls the police and tells them that she witnessed the crime and she thinks Ezra may still be in danger and they should send an officer to the hospital to guard him.

The liars and Alison have a plan to flush out “A.” Hanna, Spencer, and Emily head to act as decoys and Aria and Alison head in the opposite direction with a gun.

At home Mrs. Hastings and Melissa are trying to make sense of Spencer missing. They are shocked that Alison is still alive. Melissa blames Alison’s return for Spencer’s pill popping and erratic behavior lately. Melissa breaks down and cries and wants to know whose body is in the grave. She tells her Mom there is something she needs to know. Before she can reveal what it is the doorbell rings. Detective Holbrooke arrives and says that Cece Drake escaped custody from the police, and she knows that Alison is alive, he thinks she knows where the girls are.

Mona is watching the news at the café and sees a press alert that Emily, Hanna, Spencer, and Aria are missing and are thought to be in Philadelphia with Alison. Someone in a Red Coat arrives and Mona tells them, “This changes everything.”

Spencer, Hanna, and Emily arrive at the hospital and they see someone walking down the hallway in a black hoodie. They sit down in the waiting room.
Alison and Aria arrive in another door and head to the nurses’ station and say they are here to see Ezra Fitz. Someone calls on the loud speaker “Alison DiLaurentis report to the emergency room.” Alison walks outside and the person in the black hoodie follows her. The liars sneak out and follow the person in the hoodie. Alison is wandering around the dark street outside of the hospital looking for “A.” She comes face to face to the person in the hoodie and runs in to a nearby park and tries to hide in the bushes. “A” sneaks up behind and whispers, “Want to play?”

The liars arrive and are sure that they have “A” trapped, however unbeknownst to them there are literally twenty “A”’s surrounding them. NYC police show up and all of the “A” members disperse.

Meanwhile, Mona is in her liar with her partner Lucas. She receives a phone call and learns that the liars and Alison are in NYC, not Philly. She reassures Lucas that there are more members of the team coming.

Melissa finds her Dad drinking in the kitchen. She tells him that she wants to tell Holbrooke the truth and when Spencer finds out she will have a reason to come home. Her Dad glares at her and says that her Mom can never know what she told him.

Holbrooke receives a phone call from NYC police department and learns that Ezra Fitz has been shot in New York.

Aria stays at the hospital with Ezra and Alison takes Hanna, Emily, and Spencer to an empty theater. She has a flashback of the last time she was in the theater and Ezra brought her there. In the flashback she learned that Ezra was a “rich boy pretending to be a poor boy.” They raid the concession stand and Alison excuses herself to go make a phone call. Hanna follows her to try to listen in on her conversation.

Shana arrives at the hospital and says that Alison sent her there to make sure Aria is okay. Aria is less than thrilled to see her, and gives her the cold shoulder. Shanna offers to get her a drink but she declines. Aria begins to drift off and Shanna covers her up with her coat.

The girls all pass out in the theater and Cece sneaks inside to talk to Alison. They head to a diner and meet with Noel. Cece needs their help. They give her a new passport and plane ticket and Cece thanks her, Alison says “you’d do the same for me.” Cece slips out in to the night.

Aria wakes up in the waiting room and Shanna is MIA. The nurses tell her that Ezra is in recovery. She rushes in to his room and finds Shanna standing over Ezra. He wakes up and begins gasping for air, Aria and Shanna rush out and call for help. Doctors rush in.

Emily is awake when Alison tries to sneak back in to the theater. Alison begs her not to tell the others, and says there “are something she doesn’t need to know.”

Mona has called a meeting full of people from Rosewood that Alison had made fun of when she was alive. Paige and Lucas are at the meeting. Mona wants them to all join forces and stop Alison now that she is alive. Melissa barges in to the meeting and says they “don’t have much time.”

Alison takes Emily aside and explains to her that Cece Drake was never Red Coat, she saved them in Rosewood and “A” put her in the coffin. Alison had her wear the Red Coat to distract “A.” And, Alison says that Cece killed WIlden to save her.

The girls are trying to talk to Aria on the phone but the call keeps dropping. Alison answers the theater’s phone again but it is Detective Holbrooke, he figured out they were at Fitzgerald Theater. Alison panics and hangs up the phone.

At the hospital Ezra appears to be in stable condition again. Aria slips back in to his room and hold his hand. He whispers to her “A is Shanna.” Aria runs out of the room and looks for Shanna but she is gone.

The liars decide they need to get out of the theater ASAP. As they are running through the theater someone turns off all of the lights. Shanna emerges from the shadow in a black hoodie with a gun. Shanna confesses that she already tried to kill them all at the lodge, but the liars got out. Shanna announces she is getting revenge for Jenna, because she is in love.

Aria sneaks in to the theater and grabs a shot gun from behind the stage and hits Shanna and knocks her off the stage. Emily climbs down to the floor and checks Shanna’s pulse, she announces that she is dead.

Aria appears in shock, Spencer comforts her and reassures her that she did what she had to do. The liars and Alison all think that it is officially over, and “A” is dead. Spencer calls someone and says there has been an accident. A few moments later the police arrive at the theater and find Shanna dead on the floor. The liars and Alison are long gone.