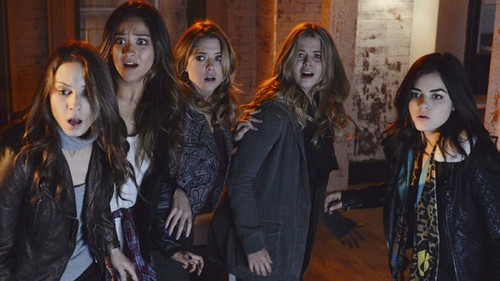 According to PLL producer Marlene King, “now that Alison is back an army will be mobilized and “A” is not in it.” It sounds like Alison and the liars will be joining forces to take down “A” in Season 5. We know Alison already has Shanna, and Noel Kahn working for her, add them to the four liars and their boyfriends, and she already has one badass army.

Hanna’s friend Lucas has been MIA for Season 4. After it was revealed Mona was blackmailing him to do her dirty “A” work form inside Radley, Lucas opted to be home-schooled and has been out of the picture ever since. Marlene King announced last night that Brendan Robinson, aka Lucas, will be returning for Season 5. Lucas’s return will definitely make for an interesting storyline considering he despised Alison, and she is back. How will he feel about his friend Hanna hanging out with the girl that nicknamed him “Hermie Hermaphrodite?”

Caleb Rivers (Tyler Blackburn) left Rosewood to head to Ravenswood for the spooky PLL spinoff series. After eight episodes ABC Family pulled the plug on Ravenswood, and Tyler revealed he was heading back to Rosewood for Season 5 of Pretty Little Liars. We were just starting to ship Hanna Marin and her new boy-toy Travis, when her ex Caleb returns to Rosewood all hell could break loose.

At PaleyFest 2014 Marlene King revealed that Alison DiLaurentis would be a permanent fixture in the Liar’s lives in Season 5 of PLL. King stated, “There are five Pretty Little Liars now.” Although everything seemed peachy in the Season 4 finale, dealing with Alison on a regular basis is only going to lead to more drama. Alison surely has a few of her old tricks up her sleeve, and there are a lot of unresolved issues between her and her four former friends.