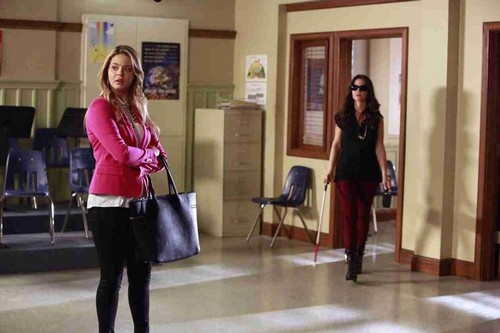 Pretty Little Liars continues to be one of the my favorite series, on tonight’s episode the liars learn that Mrs. DiLaurentis was giving Bethany Young extravagant gifts and taking her out of Radley to a horse stable, when Spencer and Emily go to investigate they learn that Melissa Hastings has been to the stable as well, and they have a dangerous run-in with “A.”  If you are like me and you are anxiously awaiting each episode, we have managed to get our hands on a sneak peek video and some spoilers to whet your appetite for next week’s episode 9 called “March of Crimes.”

On tonight’s episode, Hanna’s insecurities and current situation continued to plague her when Alison moved into the Marin house while her Dad was out of town. Now forced to live with the one person she was trying to avoid, Hanna retreated further into abusing alcohol and ended up in a sticky situation. Meanwhile, Aria dropped the ball on her maid of honor duties when Ella returned to town to plan her wedding and Spencer and Emily pursued a dangerous lead, trying to solve the mystery of the dead girl in Alison’s grave.  And lots more happened — did you watch the episode? If you missed it we have a full and detailed recap, right here for you.

Spoiler alert: If you’re one of those people who doesn’t like spoilers, stop reading now! We have some juicy spoilers for you about the season 5 episode 9 of ABC Family’s “Pretty Little Liars.”

Official ABC Family synopsis of next week’s episode: “Hanna continues down her boozy path, with the help of Caleb, and her friends can no longer stand by and watch Hanna self-destruct. After her last encounter with Hanna, Aria starts to take note of Zach and wonders if Hanna – while drunk – was telling her the truth.”

On next week’s episode Hanna’s drinking gets out of hand while Emily searches to learn more about Alison’s connection to Noel.  Meanwhile, Emily tries to find information linking Alison to Noel and Spencer makes a surprising discovery at the eye doctor.