Prince William Hunting and Murdering Boar for Pleasure One Day Before Advocating for Endangered Wildlife – “BAD” Will Hunting? 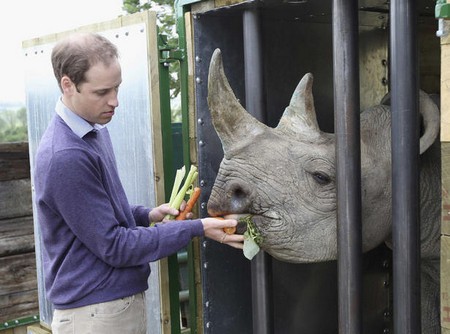 Prince William recently shared in a CNN special that his late mother Princess Diana instilled in him a love of wildlife, and that he’d hoped to do the same with his son, Prince George. Sounds just lovely… a compassionate Diana passing down a love of animals and a passion for fighting for the underprivileged and helpless to her beloved son who will share these beliefs with his own son. If only it were true.

William, who happens to be launching a campaign with his father, and rival for the throne, Prince Charles, is set to release a joint video message with his proud papa, discussing illegal wildlife trading. Shortly after, the so-called Princes of the People are set to attend a conference on illegal wildlife trade. Wills will be attending events that kick off a series of activities to save endangered wildlife including receptions, visits, and gatherings at the United Symposium at the Zoological Society London, a London conference on Illegal Wildlife Trade, and the Natural History Museum. It would seem that the new father to Prince George seems to have a true passion for the protection of animals. If only that were so.

You see, the image Prince William portrays is quite different than that of his true character. In an act of supreme hypocrisy, Wills is set to kick off all of these pro-wildlife events with a quick trip with brother Prince Harry to Spain to shoot boar! Princes William and Harry are currently enjoying a weekend in Spain at a private estate hunting and viciously killing innocent boar for pleasure. Yes, the same prince William who will be attending events where he will pretend that he actually practices what he preaches when he campaigns against the mistreatment of wildlife.

Ladies and gentlemen, it just does not get more sanctimonious than this. Nothing we could dream up could have made him look more self-righteous or hypocritical. How sickening that he was pictured holding a gun that he planned to use to shoot an innocent animal, as a form of entertainment in a cruel blood sport. Even more sickening is that he will be advocating for innocent wildlife after partaking in such a sickening activity.

I wonder if this is the wisdom he was speaking of to CNN that he planned to share with his young son. Wills better start planning for another campaign that will help restore his image and clam the many groups he will have angered after his deceit and murdering of innocent animals. Let’s hope Williams wife, Duchess Kate Middleton, is more sensible, more sincere, more morally adept, and more genuine than her deceptive husband. Let’s hope so for the sake of the young George as well as the many innocent animals that have died or will die as a result of William’s bloody sport. Wonder how the Royals and their hosts would feel if the tables were turned and they were the ones being hunted for fun. Weigh in CDLers, and tell us what you think of William’s horrific hunting hypocrisy.