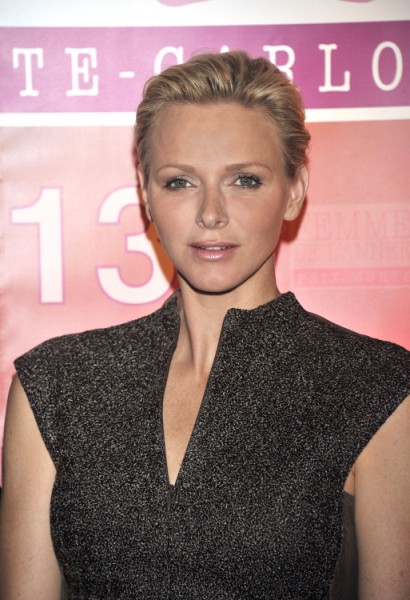 Princess Charlene Grimaldi (née Wittstock) is expecting twins. Charlene and Prince Albert announced the pregnancy a couple of weeks ago, but royal pre-babies are usually kept out of the womb-spotlight for as long as possible. In this case, however, a prominent and internationally renowned South African presenter and investigative reporter broke the twin-baby news via Twitter. Epic fail.

Derek Watts has been a household name in South Africa for more than a decade. He is a co-presenter on Carte Blanche, an award-winning South African journalism show, plus he is friends with Charlene’s father, Mike Wittstock. The “sensitive” information was made public when Watts tweeted, “My old Bulawayo schoolmate Mike Wittstock has phoned to say his daughter is pregnant with twins. Congrats Princess Charlene and Albert!” This will be the royal couple’s first children.

Prince Albert, on the other hand, has been around the block quite a few times. His two other illigitimate children, 22-year-old Jazmin Grace Grimaldi and ten-year-old Alexandre Coste, can’t inherit the throne under Monaco law. Unfortunately, Albert isn’t the most promising father. He didn’t attend Jazmin’s recent graduation and according to Alexandre’s mother, he refuses to speak with his son.

In an interview with Vanity Fair earlier this year, Charlene spoke about motherhood and her relationship with the infamous Grimaldi.

“I want motherhood very much, but everything is in God’s hands. As a couple we have been through many difficult moments and profound changes in our personal lives, but being together has always been a challenge that has brought us together,” said the Princess.

“I have a boundless confidence in our love: Prince Albert is my husband, but he has also always been my best friend, and has been able to help me overcome obstacles that seemed insurmountable. “

At least they’re off to a good start: twins, tweets, a curse and a happy marriage.