Princess Diana’s True Feelings About Prince Charles Revealed — Plus, What She Really Thought About The Queen! (PHOTO) 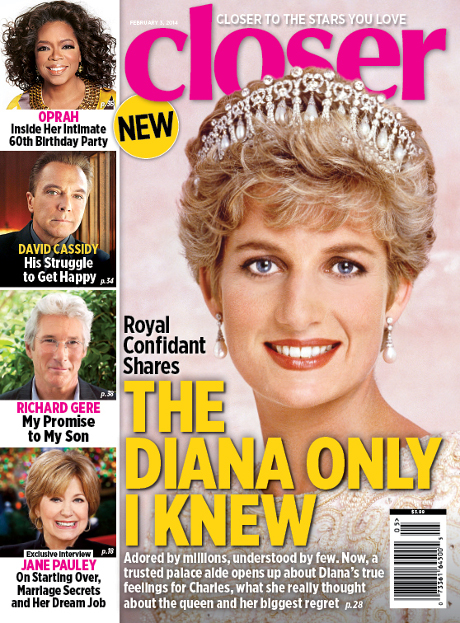 In the upcoming issue of Closer Weekly, the magazine’s cover story features some of Princess Diana‘s best kept secrets, as told by a trusted royal palace aide. The February 3rd issue promises that the trusted aide will reveal scandalous secrets such as the truth about Princess Di’s marriage to Prince Charles and how the Princess really felt about the Queen. The aide also shares Princess Diana’s biggest regret of her life, as well as other previously untold secrets.

Though the ‘zine doesn’t share who the aide is on the cover, I’m guessing that it’s none other than Dickie Arbiter. In late December, UK’s Mail Online revealed that Arbiter, 73, plans to publish a book later this year that will reveal some of the Royal family’s most scandalous secrets. Arbiter worked at the Palace for more than a decade.

Closer also features an inside look at David Cassidy‘s struggle to find happiness. The former Partridge Family star catapulted to fame for his portrayal as the oldest brother of the singing Partridge Family. After the series ended, Cassidy continued to see success during the ’70’s as a pop singer. However, Cassidy’s glory days seem to be long gone. Cassidy was arrested on his third DUI charge earlier this month, following previous arrests in August 2013 and November 2010.

Jane Pauley gives an exclusive interview to Closer in this issue. Some of the topics include starting her life over after leaving NBC, marriage secrets, and her dream job. Pauley has gained recent attention for her new book, out this month, titled Your Life Calling: Re-imagining the Rest of Your Life.

Other cover stories for the new issue include an inside look at Oprah‘s 60th birthday celebration and Richard Gere‘s promise he made to his son. Gere split from his son’s mother, Carey Lowell, in 2013.