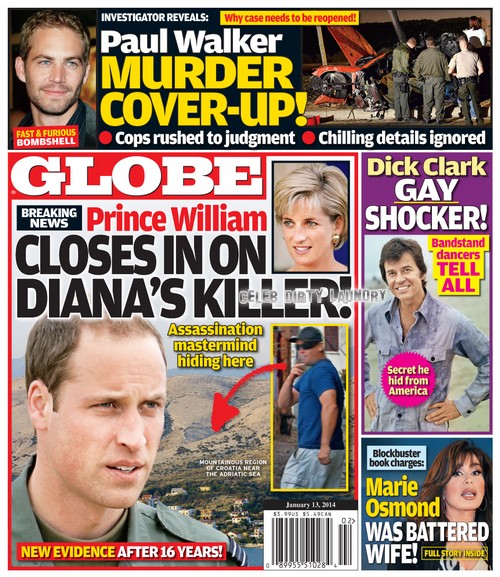 Since deciding to settle into civilian life last fall Prince William has had several things to occupy his time. There have obviously been a handful of royal duties to perform, not to mention the fact that he has a brand new son to bond with. Kensington Palace also announced that William will be taking a 10 week agriculture course at Cambridge University beginning later this month – how will Kate Middleton feel about this? William has also privately been focused on the investigation surrounding the death of his mother, Princess Diana.

According to the Jan. 13th print edition of GLOBE magazine, new information has helped William to zero in on who was responsible for the Paris crashed that killed nearly everyone in the car carrying Diana. It is rumored that around the time of Prince George’s birth Queen Elizabeth gave William a dossier filled with new information from a private investigation that she had done. It’s believed that a light was shined on the limo all but purposely blinding Henri Paul, causing him to lose control of the vehicle. GLOBE has previously speculated that the hit on Diana was connected to her work with landmines. Apparently the princess had disrupted the business of a group that doesn’t mess around and it may have cost her, her life in the end.

William has spent months reviewing the info and piecing things together for himself and it seems that it is bringing him closer to being able to avenge his mothers’ death. Diana’s crash isn’t the only one that GLOBE has opted to take a closer look at. There seems to be some serious allegations being made about the wreck that claimed the life of Paul Walker back in late November. In the Jan. 13th print edition of GLOBE you’ll learn new details that have led some to think that maybe police rushed to judgment rather than taking their time and really investigating everything.

Was Dick Clark gay? Well, it seems some old school American Bandstand dancers’ have a story to tell about the host that really helped to pave the way for stars like Ryan Seacrest. We also learn in this week’s edition that Marie Osmond was a battered wife. Even more scary is a report that Paul Walker might have been murdered and a cover-up is suspected!  You’ll find all of the details in the new issue of GLOBE which just so happens to hit newsstands today.

The answers to all the questions above and others as well, along with GLOBE’s  detailed analysis, are waiting for me when I finish work and sit back to enjoy reading my copy. I can count on GLOBE to dig deeper than any other news source to uncover the truth and then have the courage to report it. In the meantime, what are your thoughts on Princess Diana’s death? Was she murdered? Tell us your thoughts in the comments below!