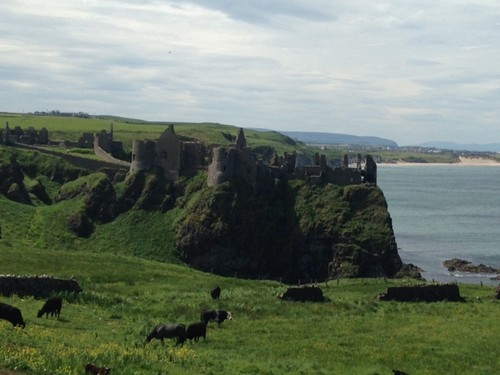 Who isn’t a fan of Game of Thrones? We have Robert Pattinson expressing his undying love for the show, and now it turns out that Queen Elizabeth might also be a fan. For some reason, I just can’t picture the Queen sitting down in front of the TV every Sunday, sipping her wine and yelling at her television screen, can you? Perhaps she orders her minions to bring her the entire season in advance, and then forces her family to watch with her.

Anyway, the Queen is making a visit to Northern Island later this month, and she will reportedly be visiting the Game of Thrones Belfast set. The British Monarchy Twitter account tweeted, “As part of the visit to Northern Ireland The Queen and The Duke will tour the @GameOfThrones set in the Titanic quarter #Belfast #GoT.”

The Queen probably just acquiesced to some poor staffer’s request to visit the set. I just can’t imagine her watching a show with so much sex, nudity, and violence. I mean, we keep hearing stories about how she doesn’t even want Kate Middleton‘s skirt hemlines to be past a certain length!

Either way, it’ll be interesting to see exactly what she’s planning on doing when she visits the set. Will she just tour the place and stop for photographs? It’s unlikely that filming will kick into high gear by the time that she visits, but maybe she’ll meet with some of the crew and cast. Perhaps Queen Elizabeth and Jon Snow can start some memes together? The grumpy Queen and the morose bastard of the North. I can already see the websites forming.

What do you guys think about the Queen visiting the set? Do you think it’s just a routine thing or is she a fan of the show? Let us know your thoughts in the comments below.