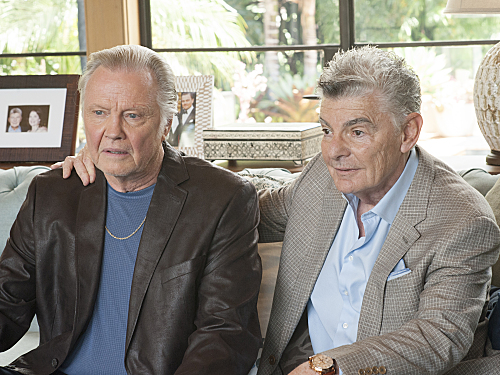 Tonight on Showtime their new drama RAY DONOVAN continues with an all new episode called, “Sunny.” On tonight’s show Lee reneges on Ray’s deal with Cookie. Kate reopens her investigation.

On the last episode tensions ran high when the whole Donovan family came together for Conor’s birthday. Meanwhile, Ashley’s stalker returned and her boyfriend demanded that Ray got rid of him; and Ray saw Cookie Brown when he showed up to take Bridget out for a night. Did you watch the last episode? If you missed it we have a full and detailed recap, right here for you.

On tonight’s episode Lee Drexler returns from his honeymoon and is confronted by Cookie Brown, who demands the rights to Marvin’s music. Ray arranges the deal, but Lee reneges on it. Meanwhile, Kate reopens her investigation but is threatened by two Southie thugs.

Tonight’s eighth episode of season two looks like it going to be great and you won’t want to miss it. So be sure to tune in for our live coverage of Showtimes’s Ray Donovan tonight at 10PM EST! In the meantime, enjoy a sneak peek of tonight’s episode below.

RECAP: Ray is laying in bed and wakes up to find his wife is already missing, he calls Avi and tells him to do his job or he will surely not keep it; Avi takes pictures of Abby meeting up with another man in a hotel. Ray gets a call from Lee and Cookie Brown is there to see him; Ray makes his way over to see what’s wrong. Ray calls Terry; Terry says he’s done with him. Ray goes to pick up his daughter Bridget, he asks if she is okay and she says she is okay. Ray says he loves her and she says she loves him too, she walks off though doesn’t get on her bus to school. Abby says she is nervous because she is eating at a diner with this man and says sh eis in love with him. Bridget’s boyfriend comes to pick her up and she drives off with him.

Mickey is getting searched in his apartment, he picks up his phone and a producer says he wants to talk; Mickey explains that he’s going to talk over his pitch Though tells Debbie to come to him since he can’t leave being search. Ray calls Abby, though he gets the answering machine instantly and looks worried. Abby is walking with her new man into a hotel room.

Ray walks into Lee’s place and tells Cookie to put his gun away, he puts the gun away and tells his guards to back off; Ray asks Cookie what he wants. Cookie says he gave them money and wants it back. He wants to talk to Recon, though Ray tells him he won’t see Recon and that he should leave right now.Abby is having her affair, but she gets a text telling her that Bridget is absent from school. Bridget picks up her phone and she says she is home, Abby asks her what’s wrong; Bridget lies saying she isn’t feeling good. Bridget tells her mom to not come home and she just so happens. Avi is ssure that Abby is cheating and he is so conflicted to tell Ray about her aggair, Recon tells Ray he wants his son and doesn’t care about that money. Recon did his best to keep his son order,Ray mentions you don’t mess with Cookie because you can’t fight him. Mickey is now at his meeting pitching his movie idea, his pitch was given the okay and loves the concept.

Ray goes to see Terry and says sorry to him; Terry tells him to leave. Ray says he makes a good living here, Terry tells him to get the hell out of his gym. Abby gets a call from Ray, he asks if she will be home later because he has something planned. Abby goes to bring Bridget something to eat, though she isn’t there; Bridget is with her boyfriend in the studio. Bridget gets a call from her mom and confesses she is out right now at the studio. Bridget says she is doing something she likes and that her mom should back off.

Avi comes in and tells Ray to leave it alone, Avi walks on over and gives Ray the pictures he took when he was out; he notices how the guy in the picture who is with Abby ; Ray takes the camera to look and Avi tries to stop him but fails. Ray takes a look at the photos and sees his wife cheating on him. Cookie walks in to come see Ray, Cookie says that he isn’t here for a pay check; he wants the kid. Ray tells him he’s got it and that he should get the hell out of here.

Bridget and her boyfriend Marvin are now recording a song together in the studio; Recon tells Ray he wants to say goodbye to his own son and Ray tells him to make it quick.

Ray is sitting outside the house of the man his wife is cheating with; he walks over to mans house and breaks into it; the man pulls a gun on Ray and he turns around. Ray tells the guy to stop seeing his wife, Ray makes it clear he doesn’t care that the guy is a cop; Ray tells him to pull the trigger.

Mickey gets a call from Jerry and is told that Alan his a big problem; Jerry says he can’t make Mickey’s movie. Ray gets home and sees his wife Abby sitting at the table and she knows he went to his house; Ray throws the documents on the table of pictures of her cheating. Ray tells her to sign the papers for the new house, she refuses so he tells her to screw off and starts drinking. Abby tells Ray he must feel good about this now, Abby tells him to go away and leave the house; Ray tells her this is house and goes to throw all her stuff out. Abby starts hitting Ray and he kisses her, though she tells him to leave her alone.

Mickey gets back to his apartment and stole several sets of silverware from Jerry’s place, Bridget is with her boyfriend Marvin in the car and she starts smoking like him. Cookie comes to the car and shoots Marvin’s driver and points a gun to Marvin; Marvin begs to be let to live. Cookie pulls the trigger and shoots Marvin; the blood hits Bridget and she is left in the car alive without being seen. Bridget walks out of the car and calls her father.