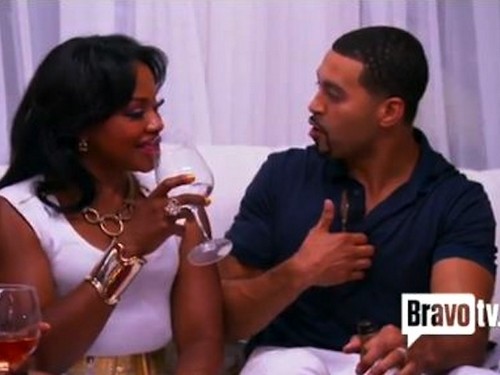 Well, well, well… Looks like the southern belle may be following her criminal enterprising hubby to jail. Ever since the shocking news broke that the Real Housewives of Atlanta resident husband Apollo Nida was arrested on charges of fraud, many have been wondering what connection his wife Phaedra Parks had to the scheme, if any. CDL has followed the lead of several other media outlets and done some digging. What we uncovered strongly suggests that Phaedra was indeed involved with Apollo’s shady business dealings in some shape, form or capacity.

A quick search through the Georgia Secretary of State’s online database will yield business filings for numerous corporations in which Phaedra is listed as a founding officer alongside Apollo for companies like “Nida Fitness Inc.,” “Nida Inc.,” and “National Recovery Group, Inc.” to name a few. Although none of these companies have been cited in the complaint filed against Apollo, there are some suspicious and noteworthy similarities to consider.

The company “National Recovery Group, Inc.” raises the biggest red flag of them all by far. For starters, it is a company that purports to offer the same type of services as most of the companies listed in the complaint against Apollo, debt, collections and asset recovery. These types of business can gain access to databases with information that is necessary to carry out the type of fraudulent activities Apollo is accused of committing. “National Recovery Group, Inc.” has a business headquarters address listed on record that screams of scandal and fraud. A quick Google Map search returned the street view of a small rickety house that does not seem like a location where a legitimate business can or should be conducted. It certainly does not look like a location where an attorney at law like Phaedra Parks would set up shop, but looks more like a location where a drug dealer with guns would set up shop.

If that doesn’t set off your spider senses, perhaps the basic website set up for the company will. “National Recovery Group, Inc.’s” basic website’s home page has a blurb about all the reputable media outlets that have reported on unclaimed property and assets, and thus advertises that it is offering these services. This is exactly what Apollo is accused of doing in the complaint filed against him. Apollo was allegedly locating checks that were legitimately issued to individuals of whom he had stolen the identity from and used in order to obtain the checks and cash them for his own personal gain. Seems awfully fishy that Phaedra set up a company with Apollo that was to offer the same services he was alleged to use in order to commit fraud.

Trust CDL, this is just the tip of a mountainous iceberg. Everything uncovered by CDL is available in databases open to the public if you know where to look. One can just imagine what the FBI has uncovered and in what direction they plan to take this case. Phaedra is a smarty pants attorney; it seems improbable that she slept with Apollo every night, conducted business with him and had NO idea if he was involved in illegal business activities.

She was the one who represented him in his previous racketeering case, so she knows all of the red flags that signal illegal activity. Now that there is documented proof she was engaging in similar patterns of business practice, it is unlikely that she could have been completely ignorant of what was going on. Expect Phaedra to be dragged into this embarrassing legal fiasco whether she likes it or not. As the plot thickens in this developing story, it has become evident that this load has way more dirt than any one could have expected. Help us wash it out with your thought in the comments below.