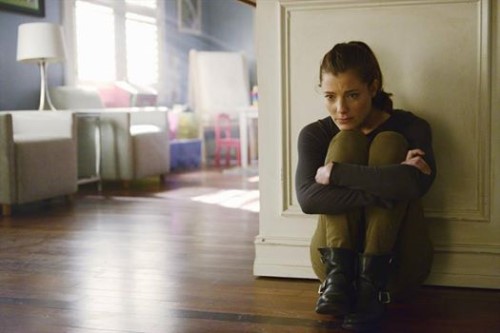 Tonight on ABC Resurrection continues with an all new Sunday December 7, season 2 episode 9 Fall Finale called, “Aftermath,” and we have your weekly recap below. Tonight, the loss of a beloved member of the community leaves Arcadians in mourning; and a cure for the virus is provided by stem cells from Rachael’s baby, but Rachael suddenly disappears and Bellamy and Maggie seek help from a surprising source. Meanwhile, Henry uncovers the facts about Margaret and his family’s role in the fire at the factory.

On the last episode, Pastor Tom’s new church was becoming a refuge for the Returned as fear and anti-Returned rhetoric intensified. Bellamy and Sheriff Fred were determined to track down the True Living members and stop them from causing any more harm, and Maggie was on the cusp of finding a cure for the virus until the unimaginable happens – a frightening kidnapping and a horrible hate crime brought everything to a grinding halt. Did you watch the last episode? If you missed it, we have a full and detailed recap right here for you.

On tonight’s episode as per the ABC synopsis, “Arcadians mourn the loss of a beloved member of the community. The stem cells from Rachael’s baby do provide the cure for the virus, but when Rachael suddenly goes missing, Bellamy and Maggie turn to an unexpected source for help. Henry learns the truth about Margaret and his family’s role in the factory fire.”

Tonight’s Resurrection Season 2 episode 9 is going to be exciting, and you won’t want to miss it. So be sure to tune in for our live coverage of Resurrection — tonight at 9 PM EST!

Tonight’s episode of Resurrection begins with Tom lying in a pool of his own blood in front of the church where he was just hit by a car, the police and ambulance arrive and Belamy is in shock – he announces to Fred that “they killed Tom.”  While they are loading up Tom’s body Belamy receives a phone call from Maggie, she reveals that the amniotic fluid worked on Ray and he is cured and everyone is going to be okay.

Lucille, Margaret, and Henry are arguing over what they will tell Jacob about Tom’s death.  Lucille reminds Margaret that Henry is their son and they will raise him how they want, and determine whether or not they will tell Jacob that the “True Living” people are out to hurt the returns.  Meanwhile, Jacob listens through the vent and overhears their entire conversation.  Lucy heads upstairs and breaks the news to Jacob that Tom is dead – he gives her the cold shoulder and wants to go outside and play.  He reassures her that he isn’t sad because Tom was different when he came back and he was a grown-up.

Belamy heads to the hospital where Ray is recuperating, Maggie reveals that they are out of doses of the cure and they need to find Rachel.  Belamy admits that he is out of doses too, and Maggie wants to admit him because his pulse is growing weak.  Belamy argues that he needs to help her find Rachel or else there is no hope for him or everyone else.

Rachel gets up out of bed and heads downstairs and demands that Janine tell her where Tom is.  Janine starts crying and says that Tom was killed, Rachel cries and doesn’t believe her.  Janine reminds that she is his wife, Rachel tries to push past her and says she needs to see Tom.  Rachel finally breaks past, but realizes that the door is locked and Janine won’t let her out.  Janine tells her that she needs to calm down and think of the baby.

Fred is working the case and trying to ID the hit and run driver that killed Tom – they have a partial license plate.  She explains that she needs his help with Henry and he is getting himself in to a bad business deal – Fred tells her that Henry’s business ventures aren’t at the top of his priorities and she storms out because he won’t help her.

At Janine’s house, Rachel sits down with her for a cup of tea and catches her off guard, when Janine isn’t paying attention Rachel hits her over the head with a sugar canister and steals the keys out of her pocket so that she can escape from the house.

Fred shows up at Henry’s house with an envelope full of money, he says that it is his money.  Addison confessed to Fred that he planned to skip town with the cash as revenge for the factory fire that his father William Kirk died in.  Henry argues that no one died in that fire, but Fred tells him that the Langston Family used their influence to cover up the deaths.

Belamy and Maggie head to an old military base where he thinks they may have doses of the cure stockpiled.  Meanwhile back home, Jacob sits down with Margaret to discuss Tom’s death.  He is scared that the people that hurt Tom will hurt his parents because he and Margaret came back and are living with them.

Belamy and Maggie arrive at the military post and Belamy demands to see a woman named Angela.  They meet with Angela and inform her that they found a cure – but they have no idea where Rachel is.  But, the government has Rachel’s body from before and they want to extract the cells from it, Angela agrees to speak to her superiors and see if they can access the body.

Henry pulls up blueprints from his family’s factory and realized that Fred was telling the truth, he confronts Margaret about his families’ lies and the 12 people that burned in the fire that they covered up.  He yells at her and demands to know if she killed Debra too, Margaret confirms that she “had to go.”  Henry kicks her out of the house and she reminds him that it is her house.  He snaps back “no ma, you’ve been dead for decades.”

Angela argues with her superior that they need Angela’s body so that they can treat the infected returns.  He shoots her down and says “it is best to let nature run its course,” and reminds her it is not their responsibility to save people who are already dead.  Angela reports back to Belamy and Maggie that she can’t help them and the government isn’t going to intervene.  Maggie storms out disgusted and Belamy follows her.

Fred realizes that the tear gas canister that was used at the church is one from the police station and it was one of his own men.  He tracks down Carl where he is frantically trying to do his laundry.  Carl insists that whoever killed Tom – it was an accident, and no one meant to kill him.  Besides Tom could come back, so what is the point of arresting him.  Fred pulls a gun on Carl and orders him to put his hands behind his back, while Fred is arresting him, Carl warns him that the returns are going to be the “end of them.”

Everyone heads to the church to pay their respects to Tom and leaves gifts where he was murdered.  Meanwhile, Belamy and Maggie sit in the car and Belamy is growing weaker and weaker.  She promises him that they will find Rachel.  Her phone rings and she reaches in her purse and realizes that Angela slipped some of the cure into her bag while they were at her office.  They rush to the clinic so that they can treat him.

Rachel is sitting in her car at the railroad tracks waiting for a train to come.  At the church the True living Group arrives and a brawl breaks out, while

Lucille is tending to Henry’s wounds, Jacob tells Margaret he doesn’t want his parents to get hurt anymore because of him.  So, he and Margaret slip off into the night together.