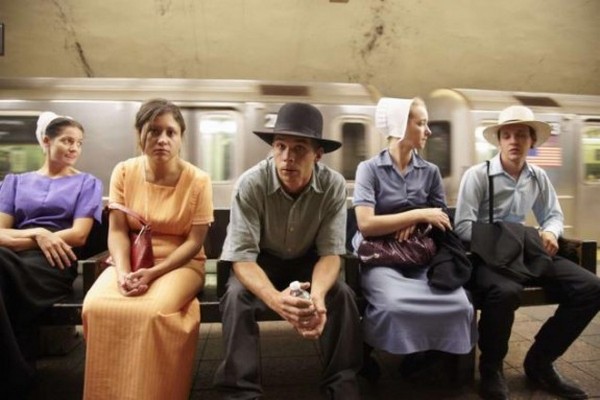 Tonight on TLC Return to Amish, the Breaking Amish spin-off airs with a new episode. In tonight’s episode “Brother, Where Art Thou?,” a major decision is made in Andy and Chapel’s relationship, but will Abe and Rebecca be there to support?

On the last episode Chapel got heartbreaking news and had to figure out a way to tell Andrew. Mary and Jeremiah showcased their business idea at the local Groundhog’s Day Festival. Sabrina got some questionable advice while Kate stayed focused on her career in New York. Did you watch the last episode? If you missed it we have a full and detailed recap right here.

On tonight’s episode a major decision is made in Andy and Chapel’s relationship, but will Abe and Rebecca be there to support? Mary takes her mind off of the family’s Shunning by opening a store with Jeremiah and the wait is over for Sabrina as her baby girl is born.

RECAP: After Chapel gave him a “no” to his proposal – Andy simply told her that he’s going to love her no matter what and that he was also going to keep asking her to marry him. Chapel turned him down because she didn’t him stuck taking care of her but once she acknowledged he wasn’t going to take “no” for answer she then told changed it to a “yes”. So Andy and Chapel are now engaged thanks in large part to his tenacity. But how will his family feel about him marrying an English girl?

They had told him last week they just want him to be happy though a couple of them left out the part about the rumors. Abe and Rebecca heard some troubling things about Andy and they were going to hash it out at last week’s dinner. However Andy’s announcement changed their plans.

They didn’t say anything then and they aren’t going to do it now. Abe is happy that his brother found Chapel but he doesn’t want Andy in his life with these rumors hanging around. And he isn’t man enough to tell Andy to his face why he’s willing to basically shun him. Abe simply told Rebecca that their family is cutting off all contact with Andy. Rebecca on the other hand feels like they should talk to Andy.

How is he going to know he’s done something wrong if all of sudden they drop out of his life?

Then there’s Mary. Mary has taken a lot of flak from the Amish community for what she’s done and actually continues to do with the TV cameras. So her new business partner, Jeremiah, asked her why she hasn’t she left yet? Jeremiah has left the Amish and he’s never turned back so he knows it can be done. But Mary isn’t prepared to lose people like he was. She knows her husband will want to stay Amish plus she still has family living within the community.

Jeremiah was able to turn his back on his past because of his difficult relationship with his adoptive mother. While Mary’s parents are both still living nearby and she wouldn’t be able to live with herself if she left the community and then was denied the chance to attend her parents’ funeral. With that hanging over her head, Mary will never fully leave nor will she give up on her English children. Despite what the bishop may want.

The Family has a meeting with the Bishop and the Bishop asked them to repent for their “sins” which they did. Then he went on to tell them that they can’t remain in contact with their other children. Mary had pleaded for a different sentence yet her wishes fell on deaf ears. So Mary heard out the Bishop all the time knowing she was going to ignore his command.

Although Mary’s behavior does have repercussions and sadly they don’t stop at her. The shunning has been hard on Katie-Ann’s social life. She wants to find the man she’ll eventually go on to marry and her parents being shunned have hindered her meeting people. Thankfully she did end up meeting someone. He’s willing to look past her family to date her but that doesn’t mean he’s the one. Katie Ann’s “friend” is nice and she does enjoy herself with him though she’s rather wait for more than the only one she can get.

Katie-Ann parents worry about their daughter. They hope their actions haven’t pushed her more into the English world.

Sabrina went into labor. She was visited by both Rebecca and Kate in the days leading up to the birth so she was well looked after in the final days. The ladies got to laugh for old times sake and they even briefly made fun of Jeremiah. And then the real fun began when Sabrina did go into labor – the baby’s father and Sabrina’s on-again/off-again ex arrived on the scene. Harry seems like he wants an active role in the baby’s life and that means Sabrina won’t be left having to raise a baby all on her own.

Sabrina’s family hasn’t relented on seeing or speaking to her since they find out she was pregnant and not married. But they will have to change their mind when they see Sabrina’s daughter. At 7 lbs and 8 oz the little girl looks chunkier than her weight. She’s just rolls and rolls of cuteness.

Andy and Chapel just got engaged and already their planning the ceremony seeing as neither of them wants to wait. They’re looking at venues and had asked Abe and Rebecca to come help. The word “help” however means something else to Rebecca and Abe. The in-laws ruined the experience when they told the happy couple they weren’t going to attend the wedding. They said Andy hadn’t changed and told Chapel they felt bad for her.

That’s how quickly they changed their minds based off of rumors. They didn’t even give Andy a chance to deny any specific rumors. They merely wrote him off in the worst possible way at the absolute wrong time!

Was that fair to do that to him? How do they know he’s fallen back into his old ways?