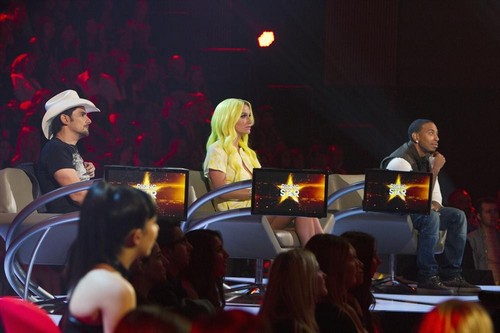 Tonight on ABC their singing competition RISING STAR airs and on tonight’s episode after weeks of competition the semifinals take place and the six remaining competitors compete.

On the last episode of Rising Star there were eight competitors who were left competing against each other to become the Rising Star. Sadly for April Lockhart, she sang a classic “Girls Just Want To Have Fun” and only got 21%. Brad believed that she had a career but he was not a fan of this performance. Ludacris said that this was just a bad song choice for her. Kesha said she loved her singing, but the song was a problem. Did you watch the last episode? If you missed it we have a full and detailed recap, right here for you.

On tonight’s show of the Rising Star, the semifinals will be airing and we’re getting close to finding out who’s going to be our first Rising Star.  The six remaining performers compete against The Wall and each other for America’s votes and the chance to move on to the finals!

Tonight’s Rising Star is going to be exciting, and you won’t want to miss it. So be sure to tune in for our live coverage of the show — tonight at 9 PM EST! While you wait for our recap, hit the comments and let us know how excited you are about this new show.

RECAP: First up tonight is Austin French, he’s singing “Love Runs out”. He got 81% tonight on his performance, Kesha says he is so cute and it was incredibly fun. Brad says that he is very proud of him, Ludacris says that there is no artist who can work the stage like he does; he’s also very proud.

Next up is Jesse Kinch and he’s singing “Billie Jean” in his own rendition, Jesse got 83%; Brad says he’s so unique and reminded everyone how great that song is in his own version, Kesha is always at a lost for words during his performance, Ludacris says that he disagrees; he couldn’t believe how Jesse made him forget that it was actually a Michael Jackson song.

Next up is Dana Williams and tonight she is singing “Sunday Morning”. Dana got 75% tonight with her Maroon Five rendition, Kesha says she knew she could win day one in the competition and believes this was her best peformance. Ludacris says that he felt as if she wants it more than anyone else on this show. Brad says she has a lot emotion in her performance and connected to the audience perfectly.

Next up tonight is Audrey Kate Geiger and tonight she is going to sing “Killing Me Softly with His Song”. She got 69% with her performance tonight, Ludacris said he can see why America was slow to vote; the song was slower than her last performance though it was very good. Kesha said it was amazing and hopes she doesn’t go home. Brad simply claps and says he’s speechless.

Last up tonight is Joshua Peavy and he is singing “What Hurts the Most” Joshua got 72% with his performance of a classic song, Brad says that he did great and loves his voice and would love to record a song with him. Ludacris says that he Dana in the hot seat deserves it more and believes she deserves to be here, Kesha says she was won over by the end. the finalists next week are Jesse Kinch, Dana Williams and Austin French.