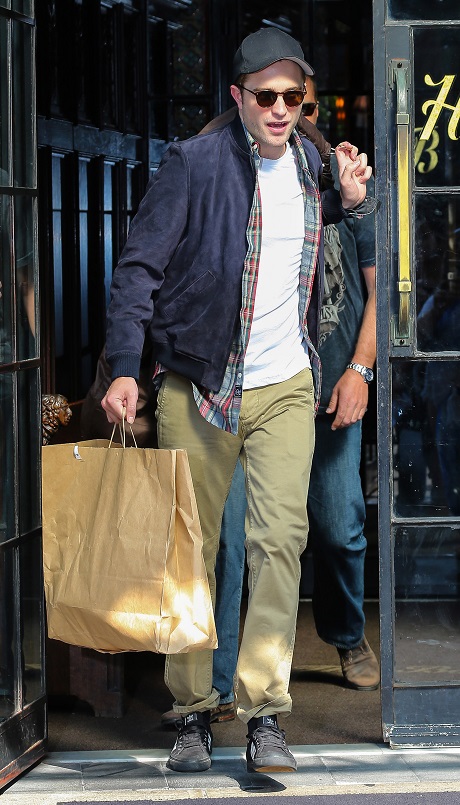 We’re starting to get differing accounts of what exactly went down during The Rover premiere after party in Los Angeles on June 12th. Some versions of the story claim that Robert Pattinson and Katy Perry were heavily flirting the entire night, with Rob publicly declaring her attractiveness to everyone in the bar. And now, several new reports are suggesting that Rob and Katy might even have hooked up.

According to Radar Online’s sources, Rob skipped the screening for The Rover to head over to the film’s afterparty at the W Hotel. Up until that point, all the stories match. We know that Rob and Katy were at the W Hotel, and we know that they were flirting and generally acting very coupley. But Radar’s source also adds that most people didn’t stay at the party until the end of the night, when Katy and Rob quit the innocent flirting and just started making out.

In fact, Radar’s source goes as far as to say, “At least 10 hotties were hovering around Rob, but his focus was on Katy. He kept kissing her the entire night.”

Honestly, I just have a hard time believing that Rob and Katy would be so willing to make out in public like that, no matter how drunk they were and no matter how late in the night it was. I get it – they couldn’t keep their hands off each other, yada yada. But in addition to Rob being extremely self-conscious in these situations, I doubt he would make a move at such a public afterparty, where plenty of guests and press sources roam around. But it wouldn’t be surprising to learn that Katy and Rob did have a little, ahem, ‘fun’ after the party winded down and they retreated to their own rooms. Poor, poor Kristen Stewart.

What do you guys think of Rob’s and Katy’s very public hookup [if it happened]? Let us know your thoughts in the comments below.