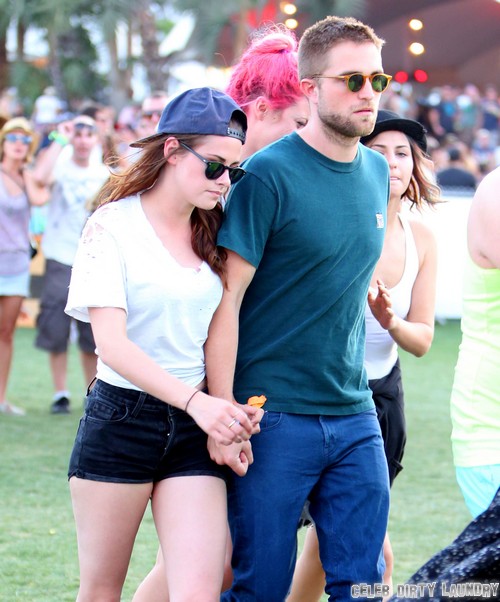 Robsten fans are in a frenzy right at the moment, Robert Pattinson  and Kristen Stewawt reunited at Coachella 2014! Twihards have been speculating for weeks whether Kristen Stewart and Robert Pattinson would be reconciling this month and celebrating Kristen’s 24th birthday together. April 9th came and went, and Rob and Kristen were not spotted together at all, no secret candle lit dinners, nothing.

Fans didn’t lose faith though, they were positive Kristen and Rob were getting back together. They came to the conclusion that Rob and Kristen must be waiting until Coachella to celebrate her birthday as they had done the last two years. It didn’t look good for the on-again off-again couple over the weekend though, because Rob was too busy partying at Coachella with his rumored hook-up buddy Katy Perry.

Just when Robsten fans began to give up all hope that the Twilight couple was together again and celebrating Kristen’s birthday at the music festival an eyewitness came forward and claimed they actually were together! A party-goe at Coachella told Celebuzz, “They arrived separately 10 minutes apart from one another around 1:30 am. The two met up at the VIP section during Major Lazer’s set and shared a friendly hug.” Rumor has it Kristen Stewart actually had a huge celebrity presence at Coachella, she just refused to pose for any photos-which is why we were all under the impression that she wasn’t with Rob Pattinson over the weekend. Hopefully we’ll all get to see a great pic of Rob and Kristen together at Coachella like we did in the pic above from the past.

So Robsten fans, are you excited that Kristen and Robert celebrated her birthday at Coachella after all? Or, do you think it is shady that there are no photos to prove that they were together? Let us know what you think in the comment section below.

Editor’s Note: Let’s face the facts folks – Rob and Kristen are pretty muhc  free spirits – at least Kristen always was a trampire – always – she thinks she’s too cool for standard relationships – and since she burned and humiliated Rob by sleeping with married creepo Rupert Sanders he has started to play the field and act like he just doesn’t care. Face up to it Twihards – Rob and Kristen still might sleep together on occasion but that’s it – they are never ever getting back to together.