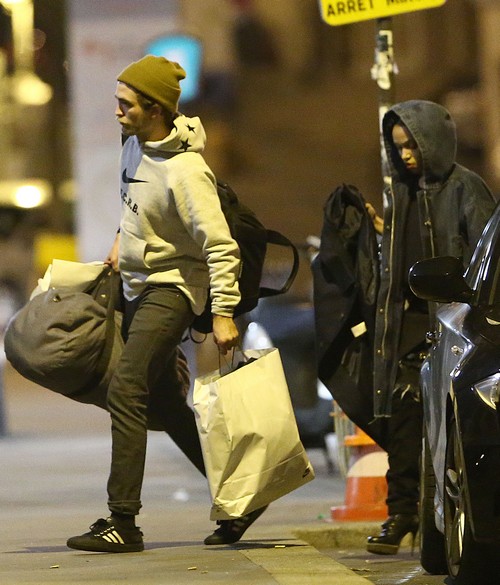 The rumors about a Robert Pattinson and Kristen Stewart dating reunion just won’t die, and it’s reportedly starting to affect RPatz’s relationship with FKA Twigs. I don’t think Rob pays any attention to all the tabloids and the rumors, but there’s no denying that these stories get around. We know that a lot of what we hear from sources and supposed ‘insiders’ isn’t necessarily accurate, but does Rob’s girlfriend FKA Twigs know that?

FKA Twigs and Robert Pattinson have been dating a few months now, and they’ve gotten comfortable with going public with their relationship. Rob recently accompanied FKA on her European tour, and they had no trouble holding hands, kissing, and being very touchy feely – even when there were cameras there.

Of course, in the midst of Rob and FKA Twigs taking their romance on the road, there were plenty of rumors about how Rob was still pining for Kristen and planning on dating her in Toronto, or vice versa. At the time, we heard that FKA Twigs couldn’t give a rat’s ass, but the rumors are getting louder and louder. Even if there’s no truth to them [and from everything we’re hearing, there isn’t], they still exist. Considering that Rob admitted that he still keeps in touch with Kristen, I guess we can’t blame FKA for being insecure. It’s not a relationship-breaking level of insecurity, but it’s still insecurity.

No girl wants their boyfriend to stay in touch with his ex-girlfriend, especially one that he was in a relationship with for three years during the Twilight craze. Considering how Robert Pattinson and Kristen Stewart ended, I imagine FKA Twigs doesn’t enjoy reading the rumors about #RobstenUnbroken, especially since Twi-hards are constantly harassing her on social media.

What do you all think? Does FKA Twigs have a right to be worried? Or are the rumors, per usual, being blown out of proportion? Let us know your thoughts in the comments below.