Kristen Stewart To Have Robert Pattinson’s Baby While Taking A Break From Acting, FKA Twigs Not Pleased? 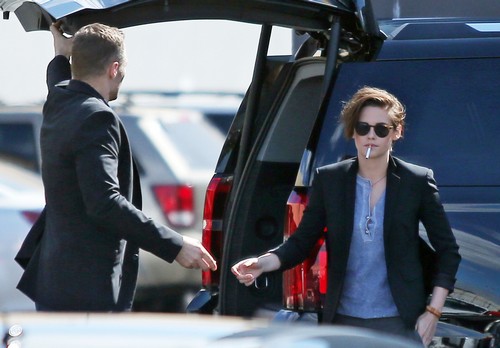 Rumors are circulating that Kristen Stewart wants to have Robert Pattinson’s baby and that is why she recently said she wants to take a break from acting. Nobody has asked FKA Twigs what she thinks about this unlikely rumor. Kristen Stewart has recently admitted that she wants to take a break from acting, which in itself is hilarious. I’m sure this has nothing to do with her very first Oscar campaign kicking off, and Kristen finally feeling the pressure of awards season. Kristen is, at the best of times, awkward and unsure of herself in interviews. Can you imagine her going through an entire awards season of giving interview after interview and trying to charm old and cranky Oscar voters? I feel like every public appearance for her will be an awkward-off between her and the voters.

Anyway, what’s even funnier than imagining Kristen on the campaign trail is hearing about Kristen’s supposed plans for this ‘break’. Certain sources are claiming that Kristen will take this time off from acting to go become a mother, because that’s apparently what all women want to do. And of course, Kristen will go have Robert Pattinson’s baby, because Rob’s girlfriend FKA Twigs, who? Nothing will get in the way of Robsten if they want to be together, not even jobs, careers, or girlfriends. At least, what’s what Twi-hards believe, and I’m sure they will have no problem buying into this Kristen Stewart/Robert Pattinson baby nonsense.

These sources [and I hesitate to call them sources, they are more like rumors] also add that Kristen Stewart’s desire to have Robert Pattinson’s baby is so that she can show her serious commitment to being in one place and her commitment to being a mother. According to these sources, if Kristen can prove that she’s willing to stick by Rob through thick and thin – and a pregnancy – she will convince him to take her back and dump FKA Twigs. Except I think they forgot that a baby usually comes AFTER the reunion, not before.

What do you guys think? Will Kristen Stewart and Robert Pattinson have a baby? Will FKA Twigs raise the child (joking!). Or is this rumor a load of tosh? Let us know your thoughts in the comments below.

Kristen Stewart FameFlynet – guess KStew will need to give up smoking if she wants to get pregnant and have a baby.