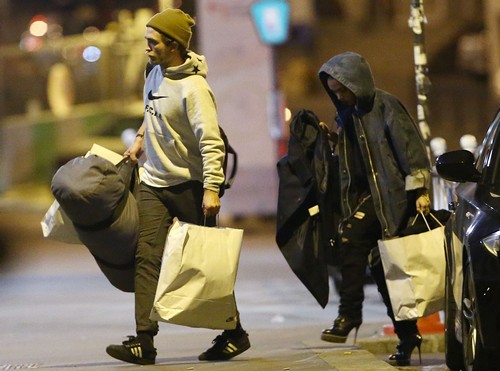 Robert Pattinson and FKA Twigs have been dating two months, Kristen Stewart is unhappy, and according to recent reports, Rob is head over heels for his new girlfriend. It’s been pretty obvious in all the paparazzi photos and videos we’ve received, but sources close to the couple are also confirming as much.

People Magazine even had a little story about how much Rob loves FKA, with a ‘source’ explaining, “They seem very comfortable with each other…They’re very cute together…He looks like he’s really in love, this is the most comfortable I’ve ever seen him…It’s like he is in a normal relationship, enjoying it. Honestly, it was miles and miles away from what it was like when he was with Kristen.”

Ouch! Remember, this is coming from People Magazine, and that means that it’s either Rob-approved or Rob’s team-approved. That means that Rob and/or his team want everyone to know that Robert Pattinson was miserable with Kristen Stewart, and he’s much happier with FKA Twigs. No wonder Kristen Stewart looks so devastated lately, especially if stories like this are getting released via publicists. Kristen’s not stupid, and she knows how the Hollywood game works. Rob may claim that he’s over Kristen and has forgiven her for what happened, but it looks like his friends and PR team haven’t. So Kristen can make all the PR-approved moves on her side, but even if she’s pretending to be over Rob by dating Nicholas Hoult or Alicia Cargile or whoever, this is probably heartbreaking for her.

Either way, Robsten is broken, and I don’t see a way for them to recover after this. Do you guys agree? Let us know your thoughts in the comments below.

Robert Pattinson and his girlfriend Tahliah Barnett (aka FKA Twigs) return to their hotel on October 14, 2014 in Paris, France. The couple returned from La Maroquinerie, where Robert watched Tahliah perform. FameFlynet