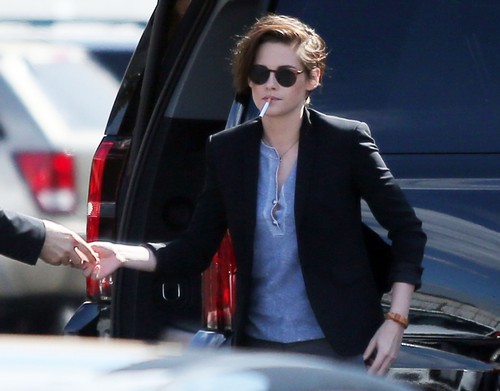 FKA Twigs and Robert Pattinson are still going strong, but there’s an obstacle to their happily ever after: Kristen Stewart. The Robsten fans aren’t giving up on rumors that their beloved Twilight couple are reuniting, but after hearing about how Rob and Kristen still keep in touch, is it out of the realm of possibility to expect that they will get back together?

See, Robert Pattinson dating FKA Twigs started quite recently – especially in public. And People Magazine has been releasing reports about how much Rob looooves FKA, which I’m inclined to think is coming from FKA’s team. After all, who benefits most from this relationship? Nobody knows enough about FKA Twigs to care about Rob dating some random rocker, but FKA’s career and media profile is getting a huge boost.

For example, FKA recently created a Google Glass ‘concept film’, and has been using her two singles ‘Video Girl’ and ‘Glass & Patron’ for the soundtrack. Kill two birds with one stone, eh? She knows that her name is getting massive attention thanks to her relationship with Robert Pattinson, so she’s taking full advantage of it.

Now, FKA Twigs is currently touring Europe – alone – since Rob had to go back to Toronto to film his new movie Idol’s Eye. And surprise, surprise, but Kristen is also making some of her promotional rounds there. Plus, Robsten’s history in Toronto is quite extensive, isn’t it? It’s where their relationship first began, blossomed, and became ‘Robsten’.

Some people seem convinced that Rob is going to get in touch with Kristen while he’s back in Toronto, but whether he does or not, I have a feeling that Kristen Stewart will play enough of an obstacle between Rob and FKA. FKA might be the coolest girl in the world, but it’s hard for any girl to be that secure about her boyfriend keeping in touch with his old girlfriend.

What do you guys think? Is FKA Twigs right to be worried about a Kristen Stewart/Robert Pattinson reunion? Let us know your thoughts in the comments below.

Update: Rumors are circulating that Kristen is considering having Rob’s baby! KStew’s announcement that she is considering taking time off from acting has been construed by some to be code for her hope to get back together with her Twilight lover and get pregnant with him. Pretty far-fetched but certainly not impossible.