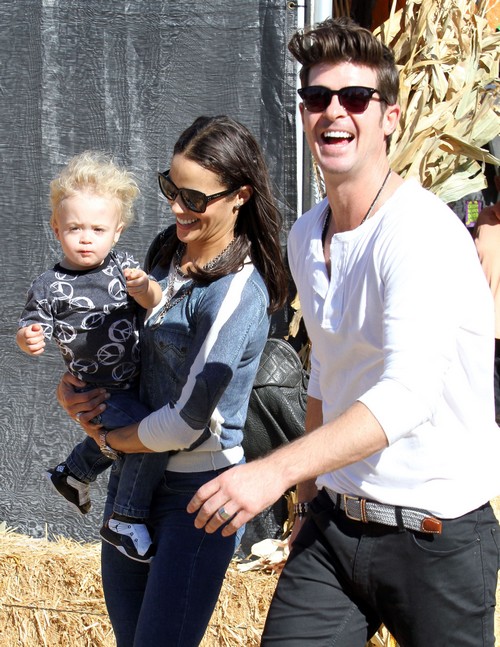 The Robin Thicke and Paula Patton divorce saga is seriously dragging into one of the most obvious publicity stunts ever pulled. Paula, the dude cheated on you FOR YEARS – remember Amy Varela! Dump his ass and keep it that way! But no, that’s unfortunately not how people in Hollywood think.

As much as I’d like to assume that Paula’s come to the realization that Robin is a douchebag who doesn’t deserve second chances, both Paula’s and Robin’s words and actions over the past few days have led to me to believe that this is just a giant stunt pulled to get them more publicity. Both of them have their famewhore-y moments, but this has got to take the cake in terms of sheer audacity.

For example, Robin took the stage at one of his performances and decided to tell the whole world that he’s trying to woo Paula back, adding that it’s HER IDEA to do so. He explained, “For those of you who don’t know, my wife and I got separated a few days ago. But you know I want everybody to know that I’m trying to get my girl back. But you know, she told me, she said, ‘You should go out there and tell the truth. You should tell them you’re trying to get me back.’ She’s a good woman, you know.”

Basically, he admits that she TOLD HIM to tell the world that he’s trying to win her back, negating the whole idea of him doing it in the first place. Because when it’s your ex’s idea, there’s really no heart in it, is there? But then again, what can we expect from the man who shoved his hand down another girl’s ass and his wife who pretended that their marriage was all sunshine and roses?

Paula’s also been playing her side of the drama very carefully, uploading an Instagram picture with the message, “Everything happens for a reason. If you love something let it go, if it comes back it’s yours, if it doesn’t, it never was, and it’s not meant to be.” Right, and telling her ex-husband to go and publicly win her back is the definition of letting him go?

However, if they’re trying for more publicity, they’re definitely succeeding. Their divorce is the first time either one of them has been this relevant in a long, long time. So maybe it’s worth it for them.