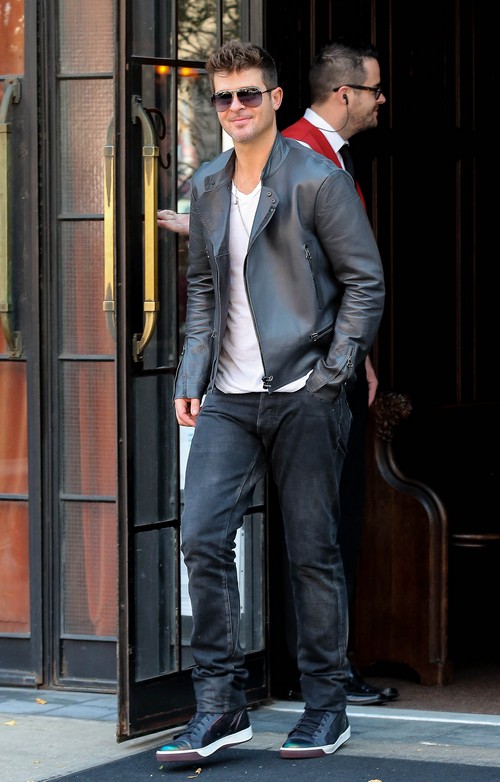 The Robin Thicke cheating rumors don’t seem to be dying down at all, lending credibility to the reports that he has been stepping out on wife Paula Patton with former Playboy model Amy Varela.

At first, the only ‘proof’ was a picture of Robin at a club, grabbing a random fan’s ass. The picture only came to light after the fan uploaded it to Twitter, and everyone noticed the ass grab in the reflective surface of the mirror behind them. So far, neither Robin nor Paula have responded to the rumors, but they were spotted on vacation at the beach with their family.

Now, another woman named Amy Varela is stepping forward and claiming that Robin tried hooking up with her as well. Apparently, Amy was at a charity event in Florida when Robin reportedly decided to ‘put the moves on her’.

Amy explained her encounter with Robin at the party, saying, “He was totally at ease, saying he wanted to get me drunk, and that I was the most beautiful girl he had seen in a while… He proceeded to tell me how sexy I was, and that he didn’t want to leave Jacksonville. We danced and had an enjoyable time drinking, partying, etc, of course because it was harmless to me at the time. He asked my partner to take a photo with me, so we did.” Of course, another eyewitness also added, “Robin was all over this Angelina Jolie look-alike and was literally touching her breasts, rubbing his hands up and down her body and seemingly a newly single man.” This was clearly referring to Verala, who claims that she only found out that Robin was actually married the next morning, when she told her friends and they revealed the harsh truth.

To see the incriminating photos of Amy with Robin hop over to our friends at Celebrity VIP Lounge – CLICK HERE!

Okay, how legitimate does this woman seem? She does have pictures to prove that she was there that night, and there are also ‘eyewitnesses’ who claim to have seen it all go down. But the fact that she didn’t know who Robin Thicke was is definitely a little weird considering how famous he is. Hey, maybe people don’t listen to his music in Jacksonville, Florida.

What do you guys think? Is Robin cheating on Paula, and is Amy telling the truth? Let us know your thoughts in the comments.