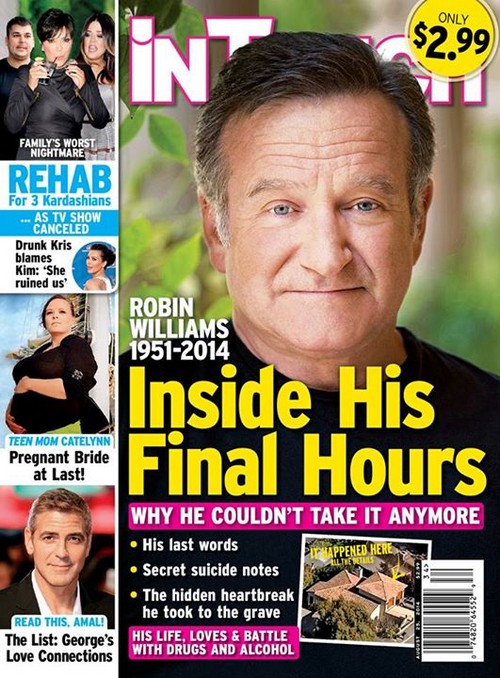 It has been nearly 2 full days since Robin Williams was found dead in his California home by a personal assistant and the world is still in a bit of shock. Tributes have poured in as his children have issued gut wrenching statements before backing completely away from social media. The Marin County Coroner’s office held a press conference yesterday that not only arguably provided far more details then the public really needed but also dropped a few hints of things to come.

Deputy Assistant Coroner Keith Boyd refused to answer any questions regarding “the suicide note or a note” which led to instant speculation by sharp members of the media that Boyd slipped up. According to the Aug. 25th print edition of In Touch Weekly there is indeed a suicide note and the contents are currently being withheld from the public. There have been rampant rumors, even before Williams’ suicide, that his third marriage to Susan Schneider was on the rocks and it was fueling his concern over finances. He had been quite outspoken about how costly his first two divorces had been, leading to him feeling like he had to work rather than being in a position of picking and choosing projects.

Also in the latest issue of In Touch is a story about the fall of the Kardashians. Khloe and Rob are both battling substance abuse issues and if we are to believe that the tendencies really are hereditary than it probably comes from Kris Jenners side of the family. She is known to drown her stresses and sorrows with bottles of wine chased by a few cocktails and sources say that all three family members truly are candidates for a stint in rehab. Their reality show used to rake in the ratings but the numbers are so dismal that cancellation is (finally) in sight. Always one to throw shade, Kris is blaming Kim Kardashian for the fall of the family empire!

George Clooney is rumored to be getting hitched super soon, can you guys name all or even half of his previous conquests? The August 25th print edition of In touch has compiled a list that you’ll want to check out. In the meantime, what do you think was the final straw for Robin Williams? Do you think that he left a note explaining his actions? Tell us your thoughts in the comments below!