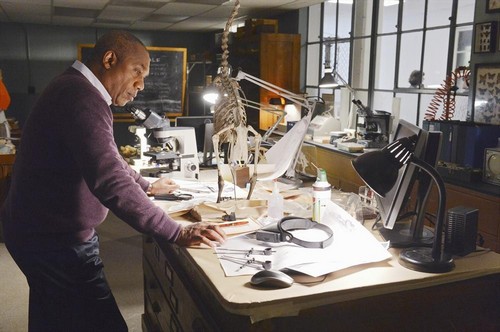 ABC’s SCANDAL sure has a legion of “gladiators’ waiting for tonight’s episode!  In “Mama Said Knock You Out,”  Fitz and Mellie’s kids join them for a TV interview at the White House. Elsewhere, Adnan seeks assistance from Harrison; and Rowan cautions Olivia to halt her investigation into B613.

On the last episode  we picked up where we left off last week with Jake killing James.  Most of the show covered the aftermath of the killing.  Olivia found out that Jake killed James and she was not pleased.  She went to her father for comfort but he basically told her it is the job.  David Rosen had trouble doing what Jake wanted him to do.  Sally sets a meeting with the NRA which sends the WhiteHouse into a tailspin.  Cyrus came up with a brilliant idea and Fitz came out for gun control following the killing of James and his own shooting.  The move was so good he immediately raised in the polls.    Did you miss last week’s heart stopping episode? If so we have a detailed recap of all the action right here for you!

On tonight’s episode the Grant children prepare for a live sit down television interview with Fitz and Mellie at the White House. Meanwhile, Adnan looks to Harrison for help and Rowan warns Olivia to stop investigating B613.

Tonight’s episode of Scandal opens with Olivia telling Noah, a reporter, that the entire Grant family is running late.  Noah is not happy, they have a live interview with the president’s whole family is less than an hour.  He tells Olivia it is impossible to push it back.  Olivia storms into a bedroom where Fitz’s children Jerry and Karen are sitting, she tells them they need to talk.

24 hours earlier Fitz, Mellie, Jerry, and Karen sit down for a nice family dinner.  Fitz thanks his kids for coming down and helping with the campaign, they don’t seem thrilled.

Olivia and her team are trying to determine how they can shut down B-613.  They have a plan that if they cut off their money supply, they won’t be able to function.  Slight problem though…they have no idea where the company’s money is.  Huck argues that they need to get Quinn out of B-613 first, Olivia reminds him that Quinn doesn’t want out.

Meanwhile Quinn and another member of B-613 have kidnapped Demetri, a terrorist and member of Ukranian Organized Crime unit.  Fitz and his team are trying to determine where Demetri disappeared to, they “had eyes on him” and he disappeared three days ago.

Mellie and Andrew are having sex while Olivia is upstairs trying to brief Jerry and Karen for their interview.  Jerry acts strange, and wants to know how live they will be and if they say something they will be able to bleep it out.  Olivia gets worried, and calls her team and tells them to look into Fitz’s kids before they go live.  As she is leaving the white house she bumps into Andrew and tells him to stay away from Mellie, the last thing they need is another sex scandal.  Andrew doesn’t seem fazed by her warning.  He tells her “glass houses,” implying she is the last person that should be lecturing anyone about a sex scandal.

Olivia’s team gives them a run down on Jerry and Karen’s grades and extracurricular activities.  She tells them to keep digging, she can tell that “something is off.”  She sends them out to get more information on the Grant kids.  Then, she receives a phone call from her Dad warning her to stop digging for info on B-613, they have trip wires in every computer database and he knows her team has been searching for their funds.  She asks him to tell her where B-613 gets their money, and he refuses and hangs up.

Olivia pays Fitz a visit and tells him she needs to go over the interview questions for their show with Noah one more time.

Meanwhile Olivia’s Mom Marie can’t get a hold of Demetri, and she had planned to hire him for a terrorist attack she is setting up.  The odds of her finding him are slim since Quinn and Charlie are currently torturing him with a drill and asking him to give up Ivan.  Charlie is pressuring her about her visit with Huck, he doesn’t believe that all that they did was argue.  He wants Quinn to move into his apartment with him where she will be safe.

Abby finds an anti-Grant Twitter account that his son Jerry was running, he was calling his father a Fascist.  They also pulled his bank account and found out he bought a Reston For President T-Shirt.  Fitz and Olivia search his room and find the shirt, which they were afraid he was going to wear during the interview.  Jerry and Karen freak out on Fitz and Olivia for going through his stuff.  Karen barges into her Mom’s room to tell Mellie what Fitz did, and Mellie and Andrew are in the middle of having sex.

Andrew runs out, and Olivia tries to talk to her about what Karen saw.  Mellie tells her that Karen is her daughter and she will deal with it.

Olivia rushes back to the office when she receives a phone call from Harrison.  The woman that has been working with her Mom has come forward, she will tell them everything Marie is planning in exchange for immunity.

Mellie is trying to talk to Karen, and denies that she was having sex with Andrew, but Karen isn’t buying it.  She calls her mom a liar, and tells her to get out of her room.

Jake pays Fitz a visit, and Fitz demands that they turn over Demetri.  Jake denies that B-613 had anything to do with Demetri.  Jake reminds Fitz that it is his job to shake hands and smile and comfort people, and it is Jake who is calling the shots.  Jake tells Fitz “this isn’t a game, and you are not getting your ball back.”  Cyrus barges into the office and tries to attack Jake, Fitz holds him back while Cyrus screams that he killed James.  Security rush in and subdue Cyrus.  Jake tells Cyrus he is “sorry for his loss” and then leaves the office.

Olivia receives a phone call from Marie.  She tells Marie she is a terrorist and a traitor to her country.  Marie says she would rather be a terrorist than like Olivia, who is basically “the help” and “cleaning up other peoples’ messes.”  She tells Olivia she will stay out of her business, if Olivia stays out of hers.

Olivia pays Mellie a visit, and she is drunk.  Olivia tells her to put down the scotch and deal with her kids.  Mellie tells her to cancel the interview.  Olivia begs Noah to push back the interview and then heads to the bedroom to try to talk some sense into Karen and Jerry.  Fitz comes in and tells them they are doing the interview out of respect for their mother.  Karen informs them they don’t have to respect their mother because she doesn’t respect them and is “screwing Uncle Jack.”  Fitz storms out and Olivia chases after him.  He barges into a meeting with several witnesses and punches Andrew in the face.

Charlie and Quinn hand a file over to Jake, Demetri gave them a location on Ivan and they have a meeting scheduled at a hotel.

Quinn meets Huck in a part, Jake sent her to find out what Huck wants from B-613.  Huck informs Quinn that he wants to save her and get her out of B-613.  She asks him why he licked her face and then decided to save her instead of kill her, and then kissed him and pushed him and left him standing in the park alone looking dumb.

Meanwhile Harrison is having sex with Marie’s accomplice, who it turns out he used to work with.  When they are finished she shoots him in the neck with a needle, and knocks him out cold.

Jake visits Olivia’s Dad and warns him to “stay out of his business.”  He reminds him that he isn’t in charge anymore, and there is no reason he should be meeting with his people at the DOD.  Papa Pope snaps on Jake and tells him that he is alone and they do not walk the same path.  Jake thanks him for being such an asshole and reminding him that when he kills him he should do it all on his own.

Andrew is trying to get into Mellie’s room to talk to her and Olivia won’t let him.  She tells him that if a reporter asks he shattered his eye playing tennis, she tells him to go get on the plane that is waiting for him.

Olivia stands outside of Mellie and Olivia’s door while they argue about her affair with Andrew.  He wants to know why she wouldn’t sleep with him after Jerry was born and she told him that she wasn’t a sexual person anymore.  He stood by her for ten years even though she wouldn’t sleep with him, thinking that she didn’t like sex anymore, but instead she was just sleeping with someone else.  Fitz tells her that their kids didn’t stand a chance of growing up with two happy parents.  Olivia walks in and tries to tell Fitz that they need to hurry up, he turns on Olivia and scream at her that he is “talking to his wife.”  Olivia runs out.

Cyrus chases Olivia down and tells her that she “can’t go home.”  Cyrus tells her that he “can’t see through the fog right now and the sky will fall,” so Olivia needs to stay.  Olivia asks him if he resents being “the help” and cleaning up their messes.  He explains that he needs to think their work is important and matters or else that would mean that James died for nothing.

Olivia heads back into the White House, and Fitz tries to apologize to her.  She tells him this is her job and she needs to direct his apologies to his kids and wife, and he needs to fix his family before their live interview in twenty minutes.  Fitz obeys and heads into the other room with Mellie.

Quinn arrives at home and finds Charlie in her kitchen.  He says that he ha smoved in, and plans to keep an eye on her and keep her safe from Huck.

Abby and David head into the office and finds Harrison passed out on the floor.  His ex girlfriend made copies of all of Olivia’s computer files and took them back to Marie and Ivan on a USB.

Fitz, Mellie, and their children sit down with Noah for their live interview, with fake smiles on their faces.  Olivia receives a phone call from her Dad, he tells her that all of the departments are funding B-613-not one specific one.