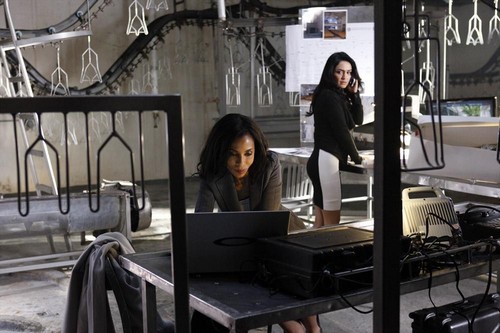 ABC’s SCANDAL sure has a legion of “gladiators’ waiting for tonight’s episode!  In “Flesh and Blood,” Olivia’s team try to resolve a security breach. Meanwhile, Fitz contemplates ignoring Olivia’s advice when his reelection campaign loses momentum; and Adnan and Maya strategize about how to proceed.

On last week’s episode Abby stepped in as Olivia’s proxy and took on duties at the White House. Meanwhile, the team continued to investigate B613, and someone threw a wrench in Reston’s presidential campaign.  Oliva’s team was successful in shutting down B16 but did not realize the consequences. Did you watch last week’s episode?  We did and we have a full detail, right here.

On tonight’s episode a security breach calls for an all hands on deck situation at OPA. Fitz’s re-election campaign becomes stalled and he considers going against Olivia’s advice. Meanwhile, Adnan and Maya continue to plot their next move

Tonight’s episode of Scandal picks up where we left off last week. Maya and Adnan came into possession of a bomb large enough to take out Fitz and his entire White House staff, and at the same time Olivia and her team shut down B-613’s computer system and surveillance equipment so Maya and Adnan disappeared with the bomb. B-613 and Olivia’s team have no idea where Maya and Adnan are with the bomb, and now they might have to work together to track them down before they make their move.

Maya, Adnan, and her henchman are in a basement setting up the bomb. Maya hands over Fitz’s itinerary and everything he will need to know to take out the president.

Charlie, Quinn, and Huck are arguing about how they will be able to track down Dominic, the man that built the bomb and sold it to Maya. Charlie wants to track the materials he used to make the bomb and Huck wants to scope out Dominic’s known 14 hiding places in the district. They bicker and want Quinn to choose whose idea is better.

Fitz calls Olivia, he is going insane because he is on lockdown. Sally Langston is campaigning and the election is in 6 days, at this rate she will beat him. Olivia warns Fitz that her Mom could kill him. Olivia makes Fitz promise her that he will stay in the White House. She says she will try to bring the campaign to him. Fitz says he wants to go to Senator Hightower’s funeral to read a eulogy but Olivia tells him that isn’t an option.

Olivia brings in full camera crews so that they can conduct his interviews from the White House. Meawhile, Syrus, Mellie, and Andrew man the telephones and try to secure as many votes as they can.

Jerry has a girlfriend. They are making out in his dorm. She asks him if he has a condom, and after they have sex she steals the used condom. She hands it over to Leo in exchange for his guarantee she will get into Harvard and Yale.

Huck has captured Dominic, he marches into Olivia’s office with Dominic and Charlie and Quinn. Olivia tells them to question him, not hurt him, they don’t hurt people in her office. Rowan receives a phone call from Leo saying he has “Little Jerry’s sperm.” Eli hangs up and tell Olivia that he was working with Rowan but he’s not any more. He tells Olivia that she needs to get to the White House, Jerry’s paternity is in question.

Olivia rushes to the White House and corners Mellie. She wants to know if Mellie ever doubted Jerry’s paternity and if she had discussed ordering a paternity test in the past for him. She asks Mellie “Which one is Andrew’s? Jerry or Karen?” Mellie ignores her and pours a drink. Olivia begins screaming at her that she could cost Fitz the campaign. Mellie reveals that “she wants Fitz’s head on a platter and wants to see it burn.” She is tired of living this lie for him. She tells Olivia that she owes her everything and she needs to clean this up and she needs to get her the paternity test. Olivia stares at her dumbfounded.

David heads into his office and finds Jake waiting for him. Jake wants David to use his resources to get into the system and use an experimental new software to track down Maya’s whereabouts. He knows David helped take down B-613 and if he doesn’t help him he will kill him.

Olivia heads back to her office and wants to know where they are with Dominic. Eli is sick of waiting. He reveals to Olivia that Dominic is the only man her Mom has ever loved. He barged into the interrogation room and puts one bullet into the gun. He play Russian Roulette with Dominick until he caves and calls Maya. Maya reveals that she never cared about Eli and she never cared about Dominic on the phone and then hangs up. Eli freaks out and Huck drags Olivia out of the room, she begs her Dad not to shoot him. Huck pulls the door shut and then the gun is shot. Olivia sobs and walks away.

David and Abbie clean up Eli’s mess. Abbie hands Eli an envelope, a DNA test that she had paid the clinic to fake. Eli hands the envelope off to Leo and Langston. They buy that Jerry is Fitz’s kid, and they are disappointed.

Olivia calls Jake, and she says that last night was nothing more than picking his pocket and getting information. Jake says it is his job to read people, and he could read that there was more to it than just work. Olivia confesses that her father killed her mother’s lover today, and her Mom could have saved him-she loved him. She realizes now that her Mom can’t really love anyone. She envies that her Mom feels nothing and doesn’t have to care about anyone.

Olivia tells Jake that that she loves Fitz-but she did feel something in bed with him last night and it feels like betrayal.

All news stations are covering the campaign. They are saying that Fitz is AWOL, and Langston is currently ahead four points in the polls. Fitz tells Cyrus that they are going to Ohio to win over the state, he can’t stay in the White House anymore it is going to cost him the election.

Harrison gets a lead and he heads to the basement where Adnan and Maya were with the bomb. They are gone, but Harrison finds photos of “Defiance High-School.” Adnan emerges and pulls a gun on Harrison.

Meanwhile Olivia and Fitz and the entire campaign team are arriving at Defiance High-School in Ohio where he is giving a speech.

Maya marches into Olivia’s office where Eli is watching the speech live. She tells Eli to “bring her baby home.” Eli thinks the bomb is at the school, he calls Olivia and tells her, they evacuate the high-school.

Olivia walks into her office and finds her Dad bleeding and going into shock. Robyn and Huck rush in and finds Olivia holding her Dad’s head on her lap, she says she already called 911.

Jake and David were able to track what Maya has been up to the last few days. Senator Hightower didn’t just die, she killed him. She knew the president would insist on going to his funeral, that is where the bomb is being planted. Jake calls Cyrus and warns him not to let Fitz go to the funeral, because it is bombed.

Cyrus calls Ethan into his office and asks him if Sally Langston is attending Hightower’s funeral. Ethan announces she left twenty minutes ago and will be arriving any time. Cyrus picks up his phone as if he is going to want her, and then changes his mind. He heads into Fitz’s office and tells him there has been a bit of a delay and they can’t leave for the funeral yet.