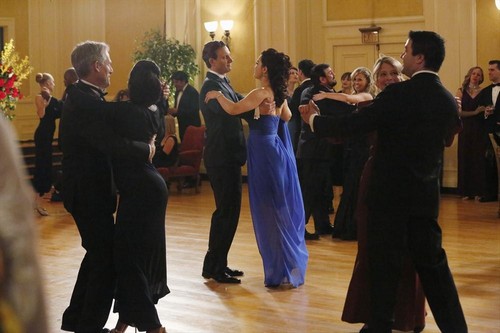 ABC’s SCANDAL sure has a legion of “gladiators’ waiting for tonight’s episode!  In “The Fluffer,”  Abby subs for Olivia at the White House. Meanwhile, the investigation into B613 continues; and Reston’s presidential campaign hits a snag.

On the last episode the Grant children prepared for a live sit down television interview with Fitz and Mellie at the White House. Meanwhile, Adnan looked to Harrison for help and Rowan warned Olivia to stop investigating B613.   Did you miss last week’s heart stopping episode? If so we have a detailed recap of all the action right here for you!

On tonight’s episode Abby steps in as Olivia’s proxy and takes on duties at the White House. Meanwhile, the team continues to investigate B613, and someone throws a wrench in Reston’s presidential campaign.  “The Fluffer” was written by Chris Van Dusen & Raamla Mohamed and directed by Jeannot Szwarc.

Tonight’s episode of Scandal kicks off tonight with Abbie and Cyrus. Olivia has sent Abbie in as her proxy to the campaign meeting. Cyrus apologizes to her and tells her he feels sorry for what she is about to go through. She tries to go over the polls, but Fitz storms out because Olivia didn’t show up, and then Mellie storms out because Fitz stormed out over Olivia.

Meanwhile Olivia is meeting with her Dad, she makes him promise that if they are going to work together he will not harm the president. He fills Olivia in on B-613’s secret account, and how they stole tiny amounts of money out of every single government agency’s funds. Olivia heads back to her team and tells them they have to into their computer software and get the algorithm code that transfers money into B-613’s account. Huck storms out, he doesn’t want to help Olivia. He says her Dad is just using her as a “mark” and he promised her something because he wants something from him.

Abbie calls Olivia and tells her to turn on her TV. Jeanine Locke is holding a press conference, apparently she has written a tell-all book regarding her affair with Fitz and it is about to be released. She even jokes and compares his penis size to a baguette.

Olivia rushes to the White House to deal with the latest crisis. It is clear that Sally Langston bought out the contract Olivia had written up to keep Jeanine quiet, and is endorsing the book to hurt Fitz’s campaign. Cyrus want’s to release Langston’s daughter’s secret abortion in retaliation. Fitz kicks every one out of the room and demands to know why Olivia sent Abbie in her place. He wants to kick Andrew off his ticket for sleeping with Mellie, but Olivia tells him that is not an option. Olivia snaps on Fitz and he accuses her of being “petty and jealous.” Olivia leaves and before she goes she tells Fitz to “make nice with Andrew and Mellie or else they will lose the election.”

Quinn and Charlie report to Jake and he gives them a file on Marie Wallace. He tells them to relieve the teams that his currently keeping surveillance on her, and under no circumstances are they to approach Wallace or blow their cover.

Harris meets up with Claire at a bar, he wants to know what Marie Wallace is up to, but Claire refuses to give him any information. She says Marie is a possible mentor to her, and she doesn’t want to “piss her off.”

Olivia receives a phone call from Jake, he is standing outside her door in the middle of the night, drunk. She answers the phone and talks to him through the door, but she refuses to let him in. She accuses him of killing one of her friends. And he says “James isn’t your friend, I would never kill your friends.” Then Jake goes on to tell Olivia through her door that he wishes she had “gone to the sun with him.” Olivia agrees and wishes she had too. She punches the door and says, “I asked you to save me…” then gets in the elevator and leaves.

Olivia heads into work the next day, and Huck reveals he has found B-613’s algorithm and account, but the account is empty. Huck says it is all just a legacy code left over from an abandoned treasury project. Olivia meets with her Dad and accuses him of “playing her.” Olivia’s Dad insists that he has no idea where the money is, Jake must have moved it. Her Dad explains that if Jake moved the money to their inside network, then it has to be accessed from the inside and the only person with the code is Jake.

Abbie calls Olivia to the White House, they have a situation. Cyrus has released the story to the press that Langston’s thirteen year old got an abortion even though she is opposed to abortions, and meanwhile Fitz is meeting with Senator Ramirez trying to bed her for the Vice President position. Olivia storms in and kicks Ramirez out, she tells Fitz that Andrew is VP, he can’t replace him at the last moment. She asks Fitz what he needs, and he tells her he needs Andrew to “stop screwing his wife.”

Olivia meets with Andrew and threatens him. She tells him he can’t have both, either he “screws Mellie” or is the Vice President of the United States. If he chooses Mellie then Olivia promises to “tear him down brick by brick.” Andrew confesses that he is in love with Mellie. Olivia says that doesn’t matter, men like him always choose power over love.

Olivia, Abbie, and Cyrus meet with Langston’s campaign manager. They all decide that they are “mutually destructing,” and the more mud they sling at each other the high up in the polls the other presidential candidate Reston climbs. They decide to work together to take down Reston. They head to prison to visit Reston’s wife and give her a file and tell her she shouldn’t be in jail, and tell her that her husband Reston should be.

Meanwhile Quinn and Charlie are sitting in a van watching Olivia’s Mom Marie. They are shocked to see Claire on the tapes heading into Marie’s office.

Huck has created a device to download all of the passwords and account numbers, Olivia needs to attach it to Jake’s cell phone for thirty seconds so it can get the data.

Olivia heads to Jake’s house, and appears to be drunk. Jake gets out of bed and asks her “what she wants.” He asks her if “this is what she wants” and starts kissing her. Huck fills Harrison in on Olivia’s plan to seduce Jake and put the device o his phone. Back in Jake’s bedroom Olivia seems to have the seduction part down, she still hasn’t plugged the tool into his phone though. After they have sex Jake tells Olivia that he has missed her and then falls asleep, once Olivia is sure that he is asleep she plugs the device into his phone, and then brings it back to the office and hands it over to Huck.

Mellie is trying to help Fitz pick out his ties, but he clearly has not forgiven her. He throws the tie onto the floor and storms out of the bedroom.

Reston visits his wife at prison, and she gives him the third degree. Reston informs her that no one is going to believe her, and if she tries to talk he will have her shipped off to a mental hospital to rot. He tells her to do exactly what he tells her, “til death do they part.”

Olivia has dinner with her Dad. Marie Wallace shows up at the restaurant and sits down at their table, and they both look like they have seen a ghost. Marie tells Olivia that she has come to see her because she loves her and she is worried about her. She wants her to find a new line of work because her job is too crazy. Harrison calls and reveals to Olivia that Marie and her men have murdered Claire. Marie explains it was because Olivia wouldn’t “stay out of her business.”

Abbie uploads a video of Reston threatening his wife and confessing to murder when he visited her in prison. The news anchor reveals it is now a “two candidate race between Langston and Fitz.”

After Mellie’s speech to battered women she chases down Andrew and invites him to come to her room to “talk.” Andrew says it’s not a good idea. Apparently he has chosen to be VP over being with Mellie. Mellie storms into Fitz’s office and smacks him and screams at him for “taking everything from her.”

Olivia is sitting at her desk feeling sorry for herself for not taking her Dad up on his offer to get her out of this world. Abbie tells her, “You don’t get to run, you’re a Gladiator. They don’t run, they fight, they wipe off the blood and stitch up their wounds and live another day. They don’t get to run.”

Huck uses the device that Olivia plugged into Jake’s phone to hack into B-613 network, files, their power grids, and their accounts.

Quinn and Charlie see Marie in her hotel room, she is getting her bomb ready for attack. Quinn is freaking out on the radio to Jake, Marie has the “Mona Lisa” of bombs. Quinn wants to move in on her but Jake says “not yet.”

Olivia orders Huck to “shut down B-613.” He presses a button on the keyboard and everything in Jake’s office goes black.
Quinn and Charlie lose radio connection with Jake because Olivia and Huck shut them down. Quinn makes a move and goes into the hotel room but Marie and the bombs are gone.

Jake storms into Olivia’s office and chokes her against the wall. He screams “What have you done? You just killed the President!”