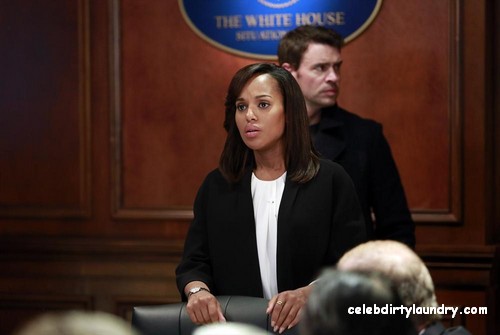 ABC’s SCANDAL sure has a legion of “gladiators’ waiting for tonight’s episode!  In “The Price of Free and Fair Elections,” the season 3 finale, the arrival of Election Day means the candidates will do just about anything for votes. Meanwhile, Olivia tries to make sense of Maya’s motives; and Charlie makes a shocking move.

On last week’s episode a security breach caused the team to spring into action.  Because of Olivia and her team’s interference B16 was not able to stop a bomb meant for the president from being set.  Olivia’s father was called in to help stop Olivia’s mother who they found out was behind the bomb.  Jake warned Olivia not to trust her father.  The bomb was set under a church and Jake called Cyrus in time to clear the church. Cyrus makes the decision not to call and evacuate the church because Sally Langston and the Vice-President are there for the Hightower’s funeral.  Fitz and his wife are still at the White House and Cyrus delays Fitz’s departure further – his intention being to allow the bomb to go off in a church full of people before Fitz arrives but while Langston is there.  Can you believe how evil Cyrus is?  Did you watch tonight’s episode?  We did and we recapped it right here for you.

On tonight’s episode the candidates are under the gun as election day arrives. The bomb goes off and clearly Cyrus did not warn people because people are hurt.  Nothing is off limits as the candidates try to capture votes. Meanwhile, Olivia tries to understand Maya’s motives and Charlie makes a very surprising move.

Tonight’s episode of SCANDAL is going to be absolutely incredible and you won’t want to miss even a minute. We’ll be recapping it for you here live. In the meantime hit up the comments and let us know how excited you are for the season 3 finale?

Tonight’s season finale of Scandal starts off with Senator Hightower’s funeral, where Maya has stashed a bomb to kill the president. The president is still at the White House where Cyrus is stalling him. Jake barges in and tells Fitz about the bomb, Fitz makes a call and they begin evacuating the funeral. The majority of the people get out of the building as the bomb explodes. Sally Langston survives, and Leo convinces her to “be Jesus.” She heads back into the rubble, rubs some coal on her face, and then begins administering first aid to the victims.

Olivia abandons her father at the hospital and rushes to the White House. She tells Fitz he has to make a press conference now, or else he will lose the campaign. In the middle of his speech about the bombings all major networks drop his speech to cover Sally Langston saving attendees lives at the funeral. Afterwards Olivia heads into Cyrus’s office and slumps into a chair. She declares that they just lost the election and Cyrus agrees.

Cyrus and Olivia break the news to Fitz, Mellie, and Andrew that their campaign is over. Drunk Mellie says she want a refund, she hired Olivia so that they would win.

Olivia heads back to the hospital to see her father Rowan, who is recovering from Maya stabbing him. Olivia says the doctors called him a “miracle.” She breaks down in tears and tells Rowan that “they are going to lose.” Rowan says he “wishes he could help her because he loves her.”

Harrison is still being held captive by Maya’s partner Adnan. He makes a deal with her, and tells her to “save his life” and in return he will save hers. She lets Harrison go unharmed.

Abbie and Harrison walk into the office and catch Huck and Quinn having sex on the desk next to Rowan’s puddle of blood from earlier. Abbie says they are disgusting and tells them to clean up.

David appears on Jake’s doorstep, furious. He doesn’t get why Jake didn’t tell the president that Cyrus let the bomb blow up and kill those people. He knew twenty minutes before the bomb went off that it was there and didn’t do anything to stop it. David wants to take down Cyrus, Jake says he isn’t going to help, he’s going to watch the football game.

Charlie packs his bag and leaves Quinn. He gives her an envelope and says that what is inside it is going to ruin any possible happiness she and Huck will ever have.

Fitz is working on his speech with Olivia. He tells her once he loses the election they can move to Vermont. He wants to have two kids with her and he doesn’t care about Mellie-he doesn’t owe her anything. Olivia’s guilt kicks in. She tells Fitz Mellie’s secret, his Dad Big Jerry raped her while Fitz was running for governor.

Fitz finds Mellie sitting in her room getting drunk, she can tell by the look on his face that he knows. Mellie starts rambling that she took a paternity test and Jerry is Fitz’s son, not Big Jerry’s. He hugs her and comforts her and tells her that he doesn’t care.

Election Day is in 24 hours, all of the news channels are predicting Sally Langston will win according to the polls.

Leo pays Cyrus a visit and gloats. Cyrus pours him a drink and offers him some advice, he tells him to “try to protect his soul if he’s got one” when he gets into the White House.

Quinn brings Huck to a suburban street and shows him a woman and her child through the window. She says the boy’s name is Javi. Huck begins tearing up and asks her why she would bring him here-then he storms off.

Fitz is preparing to give his speech, he calls Olivia and she tells him she isn’t coming, she is going to stay with her Dad. He promises her after the election is over they will be together and Olivia says she can’t be with him. If he left Mellie now, knowing what he knows, she wouldn’t be able to be with him on those conditions.

Olivia heads back into her Dad’s hospital room and finds her Mom Maya sitting next to her unconscious Dad. Maya says she did everything for Olivia because “that man doesn’t love her, he just uses her and tosses her to the curb.” Olivia asks her if her entire life with Rowan was a lie and if she ever loves him. Maya says she could have killed him if she wanted to, but she didn’t – that means she loved him at one point.

Meanwhile Fitz takes the podium in front of a sea of people. While he is talking Mellie and the kids are standing behind him. Blood starts spewing out of Jerry Jr.’s nose and he drops to the floor in the middle of the speech.

Olivia Pope gives a press conference in front of the hospital and announces that Fitz’s son has passed away due to bacterial meningitis. She heads back inside and sits in the waiting room with Cyrus. They can’t believe the kind of people they have become. But, on the bright side they are going to win the election now with sympathy votes.

A secret service agent takes Fitz aside and reveals to him that the type of meningitis that killed his son is kept under lock and key at Fort Dietrich. Maya Pope stole it a few days ago. Olivia’s Mom killed his son. Rowan overhears Fitz and comes out of his hospital room, he tells Fitz that he will serve Maya Pope’s head on a platter to him.

The next day Fitz is up and at it, despite Cyrus begging him to take it easy. He stops to check on a heavily sedated Mellie. She cries about how she was never there for Jerry because she was afraid he was Big Jerry’s son.

Huck appears on Olivia’s doorstep in tears, he tells her that Quinn found his family. She lets him in and he sits on the couch and cries about how happy and safe they are now, and insists that leaving them behind was the best thing that has ever happened to them. Olivia comforts him and holds him.

Rowan is out of the hospital and working on finding Maya. Olivia calls him and asks him if the plane and her new life was still on the table. Rowan confirms it is. Olivia heads to the office and tells Huck and Abbie that she is quitting and leaving today. Abbie is not happy that she is abandoning them and tells her to go “run to her Daddy.”

Rowan corners Harrison in the parking ramp. He shows him a picture of Adnan, and she’s dead. Maya killed her. Harrison tells Rowan he knows where Maya is picking up her cash.

Olivia is trying to pack. Jake tries to intervene. Olivia says she is leaving and there is nothing anyone can say to change her mind. She is the scandal and she is doing what she does to all the scandals – shutting herself down by leaving town. Jake begs her to take him with her. He wants them to “stand in the sun together.”

Maya is picked up by men with guns and thrown in a car. Rowan calls Fitz and tells him that Maya Pope is dead, They picked her up and took her off site and killed her.

Harrison finds out that Olivia is leaving. He rushes to Rowan’s office and tells him to stop her. Rowan reveals to him that Fitz reinstated him as the leader of B-613 since he killed Maya. Harrison puts two and two together. Killing Jerry wasn’t Maya’s style and it never made sense. Rowan killed Jerry and he got B-613 back. Rowan reveals that he killed Jerry because Olivia wanted Fitz to win the election, and that was a sure fire way. He goes on to explain that there is no such thing as a free and fair election. Fitz took his child, so he took Fitz’s child.

Cyrus rushes out of the campaign room and reveals to Fitz that he has officially won the election. Fitz walks into his office and shuts the door and drops to his knees.

David receives a shipment of dozens of boxes full of files and a note from Jake telling him to “go get the bad guys.”

Rowan shoots Harrison and then checks on his prisoner Maya. He lied to Fitz, he didn’t kill her, he is holding her prisoner again.

Huck finally gets up enough courage and knocks on his wife’s door, she opens it and he  bursts into tears when he sees her.

Olivia and Jake board their plane to their new life and they take off. The White House calls Olivia’s phone and she hits the ignore button.