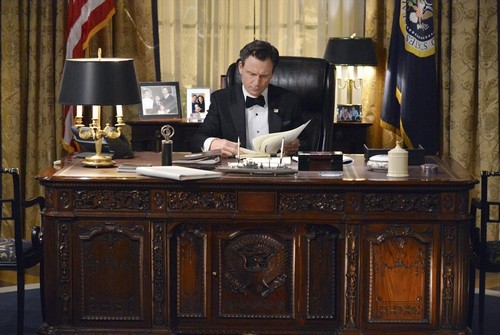 Tonight’s episode of Scandal was, as always, deliciously scandalous!  Fitz is in trouble, Sally is out to get him and there are no holds barred in their battle.  I cannot wait for next week’s episode and to wet your appetite we have some juicy spoilers and a sneak peek video of “We Do Not Touch the First Ladies” which will air March 6th, 2014, for your enjoyment below!

On tonight’s show the White House dealt with a bombshell announcement from Sally Langston.  It seems not only is Sally running for president against Fitz but she is not resigning her vice-presidency.  Meanwhile, Olivia found herself in a challenging new role.  Mellie Grant the First Lady and Olivia Pope have a sit down and Mellie told Olivia in a very sarcastic voice to smile because, “the world is watching,” the camera pans on to the window where photographers are snapping pics.  They are trying to put to rest the rumors that Olivia was Fitz’s mistress.  If you missed tonight’s episode you can read a full and detailed recap, right here.

Spoiler alert: If you’re one of those people who doesn’t like spoilers, stop reading now! We have some juicy spoilers for you about the season 3 episode 12 of ABCs “Scandal.”

Official ABC Synopsis: “Old feelings and jealousies arise at a Presidential event causing Fitz to face a harsh reality. Meanwhile, Quinn tries to prove herself to B613 and Leo Bergen sets up a meeting between Sally and an old friend.”  “We Do Not Touch the First Ladies” was written by Heather Mitchell and directed by Oliver Bokelberg.

On the next episode Fitz is faced with the harsh truth.  The final episodes of Scandal will concentrate on the Presidential election and it is not going to be an easy path for Fitz.

Scandal Season 3, Episode 12 “We Do Not Touch the First Ladies” airs on ABC on March 6th, 2013. Check out the preview video below and let us know in the comments below what you think!